Is the latest Switch Force game really all that "Mighty"?

Mighty Switch Force is a series with which I have had no previous experience. I have heard some great things about these titles, but honestly this latest incarnation did not seem like a game that would peak my interest at all. I was expecting something completely different from what I actually experienced. After spending some time with Mighty Switch Force: Hyper Drive Edition, it became clear why these games are so beloved by many.

Mighty Switch Force is something truly unique, but also very familiar at the same time. Upon starting the game I immediately noticed similarities with games such as Mega Man, Gun Star Heroes, and Sega Genesis era Sonic the Hedgehog. There are a variety of play mechanics present, including platforming, puzzle solving and a hint of action via laser pistol. I immediately felt like I was playing an old school platformer with a unique and satisfying puzzle element thrown in. The story is very bare bones and lacking, but honestly, the story is the least important element of Mighty Switch Force HD. From what I gathered, you play a female mercenary or law enforcement that has to rescue prisoners that were set free. Thats pretty much it. Still, the gameplay more than makes up for the lack of story. 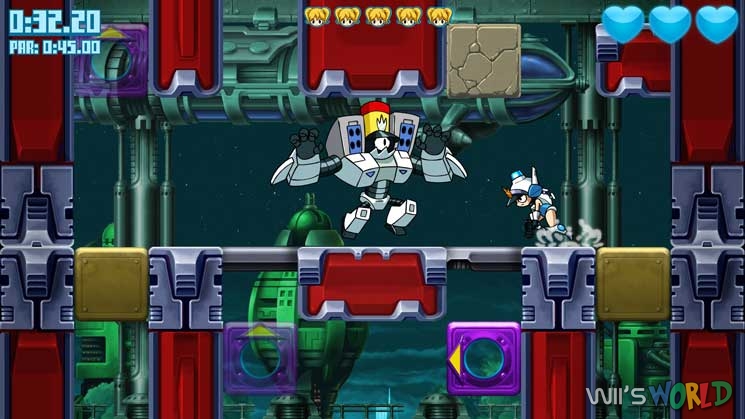 The action takes a backseat compared to the puzzle/platforming. The main character is equipped with a pistol and a switch mechanic. Details about the power or item that creates the switching mechanic are never explained. The puzzle elements involve pressing the A button on the controller to make blocks visible or invisible so that you can climb them, or use cannon-like blocks to launch yourself across the screen. This mechanic is difficult to describe in full detail, but it is incredibly satisfying. The game starts off with a very simplistic level to familiarize you with the switching mechanic. The difficulty then ramps up significantly about half way through the game and becomes brutal, but in a way that is never unfair. The game does become very difficult and the challenge, instead of becoming overly frustrating, made me want to master each level. This is something that rarely happens in video games. Your hero is equipped with a pistol that is used sparingly on enemies that are easily defeated, but it adds just enough variety to make the game never feel dull. The platforming also feels great and was spot on. I rarely felt like my deaths were because of an issue with the game itself.

While playing Mighty Switch Force HD a rush of nostalgia came over me. I felt like I was 5 years old again playing on my Super Nintendo. The music, the graphics, everything felt like a modern take on a classic game. The game looks absolutely stunning for a 2D action/platformer. The animation is wonderful, the character designs are creative, yet familiar and the HD treatment for this game makes every color and character pop. This game is beautiful. As great as the game looks, the sound doesn't quite hit the same note. Although the audio is pretty good, some annoying repetition of sounds and dialog make for a less than mesmerizing audio experience. First off, the music is brilliant. Anyone who grew up in the 80s and 90s will instantly be familiar with the tunes at play here. Like I had mentioned above, a mix of Mega Man, and Gunstar Heroes is a perfect way to describe the audio experience. The annoying bits come from the repetitive dialog. Every time the main character grabs an item or health, she repeats the exact same words or phrases in the same annoying, whiny voice that can be grating. Eventually I got used to the high pitched whiny voice and it didn't bother me as much, but it can be quite irritating.

Mighty Switch Force HD is not exactly a long game, but it will keep you playing if you are interested in high scores. Also, there are bonus stages after the initial 16. Each stage will take any where from 2-7 minutes. With the amount of times that I died during my playthrough, I was about 3 hours in. Not too shabby for a game that can be replayed with a bonus weapon and stages.

The Wii U GamePad specific features are quite sparse. There is the ability to play only on the pad itself. While playing on a TV screen, there is a radar on the GamePad that shows the range of the closest prisoner you need to rescue. This is a nice little idea, but I would rather search for the prisoners myself without the help of radar. Overall, the entertainment value of the Mighty Switch Force HD is well worth the $15 price tag. The tough challenge and the excellent puzzle/action/platforming are some of the most satisfying moments I have had with a downloadable title this year. If you are up for a brutal, but fun challenge Mighty Switch Force HD is just the game for you.