Races ahead of the eShop crowd.

BIT.TRIP Presents... Runner 2: Future Legend of Rhythm Alien, or more simply Runner 2, is the sequel to Gaijin Game's Bit.Trip Runner, first released on WiiWare in May 2010. Runner 2 sheds the Bit.Trip series' mainstay retro graphics for a collection of detailed, colorful and wondrous stages for a now-HD Commander Video to race through.

Once you get past the stark visual differences between Runner 2 and its predecessor, the core gameplay behind the beloved Runner is impossible to miss. Jumping, sliding and kicking to the rhythm are still the hallmarks which Runner 2 strongly upholds. The most apparent improvement besides the game's graphics is that Runner 2 is far more accessible to players of all skill levels. 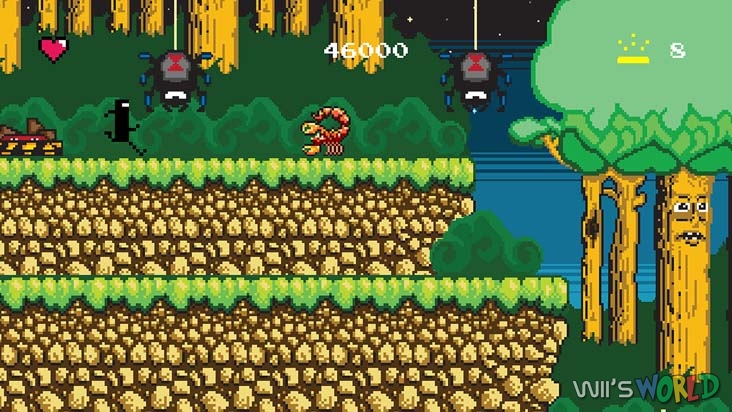 Amongst the endless whimsy, Runner 2 introduces its gameplay mechanics at a slower pace and offers multiple ways for players to raise or lower the difficulty of each stage. Besides each level having an easy, normal, and hard mode, the middle of every stage features a checkpoint that can be used to avoid repeating the first half of a level or ignored to add a greater challenge. So no matter how good or bad a gamer you are, Runner 2 can match your pace.

The standout draw of Runner 2 is just how great it plays; as far as endless runners and rhythm games go, Runner 2 is the top of its genre. Each action you take adds a note to the overall song playing, and each mistake made sends you right back to the beginning of the level. Many have likened this to learning how to play a song on an instrument. Whatever you compare it to, it works. In the main game there is no Game Over or any other kind of interruption stopping you from mastering each stage one step at a time.

Content wise, Runner 2 has 5 worlds, each with their own unique theme and 14 levels. These are linked via an overworld map that's vaguely reminiscent of Super Mario Bros 3. As I mentioned earlier, each stage can be tweaked to your preferred difficulty and the game keeps track of which mode you've cleared any given stage on. Every world has a special hidden character to unlock and several costumes found in treasure chests scattered throughout. Each of these chests require a key found in the same world to be obtained in order to open, but these keys only appear once you've cleared a later stage in that world known as the 'key vault'. This mechanic pushes for some backtracking in order to unlock everything but Runner 2 is anything but linear. Many levels introduce branching paths, some easier than others and harder paths offer rewards or alternate exits. There is a lot of replay value here. 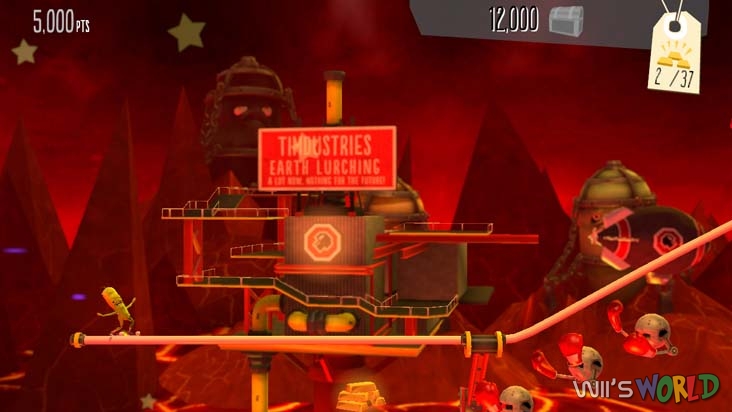 Also hidden in several levels are 25 retro stages that challenge players by giving them only 3 chances to reach the goal. Besides the classic 'lives' concept there is also a graphical throwback that is even more nostalgic than the original Runner.

The art and sound presented in Runner 2 are charming and fit together to make a well-polished experience. There are plenty of animated shorts narrated by Charles Martinet (the voice of Mario himself!). The backdrop for each world is littered with all kinds of details, the Welkin Wonderland for example is home to gigantic pink monsters and floating cloud factories straight out of Willy Wonka's playbook. As interesting as the settings are, they are only a step away from being a hazardous distraction because in Runner 2 you need to keep your eyes focused on what's just ahead of Commander Video's every step. The game's music is catchy and really fun to 'participate' in, while playing it doesn't feel like you are simply listening to the music and in reality you aren't. Each world has its own unique sound and you get a great feel for each destination based on the local rhythm.

There really isn't much wrong to talk about, Runner 2 is a very solid addition to the Wii U eShop and an excellent game for any platform. My only complaint would be that it's strictly a single player event and some sort of dueling banjos co-op would have been very welcome. Overall Runner 2 does not disappoint, and just may be the best game on Wii U's eShop for quite a while. If you are interested even a little, it is worth the risk.

Excellent review. I have this game on Steam and it is one of the best games I've ever played.