A decent tactics RPG buried beneath a lackluster story

The Game Bakers' SQUIDS Odyssey is a remake of SQUIDS and SQUIDS Wild West, originally released for PC and mobile devices. While the port contains the first two games in the SQUIDS saga, it also contains a new story chapter and further character and equipment additions to encourage a second purchase if you've already played the previous games. SQUIDS Odyssey has been redesigned to function with the Wii U GamePad, so although it still carries traces of the series' mobile origins, the game feels at home on the console - though, sadly, the GamePad isn't useful for much when used alongside the TV except keeping track of whose turn it is during battle.

Regardless, SQUIDS Odyssey is a charming game to play. It grabs you from its opening screen filled with bright, cartoon graphics and its fun, light-hearted music composed by Romain Gauthier. The story itself starts out typically enough, with its small band of squid heroes looking to prevent the mysterious Ooze from overrunning the undersea world, but sadly the story spirals downward from there. It's disjointed and filled with stereotypes and clunky dialogue. It's not a complete loss, as some genuinely humorous moments exist, but it's overshadowed by an overall poor job of transitions. There's not enough transitioning between speakers in the dialogue, particularly as you progress later in the game. The story ends up as an obligatory set-piece before each level instead of engaging on an emotional or intellectual level. The level expositions can be skipped though, so you can get right to the gameplay if you want to. And really, the gameplay is where the heart of SQUIDS Odyssey is really at anyway. 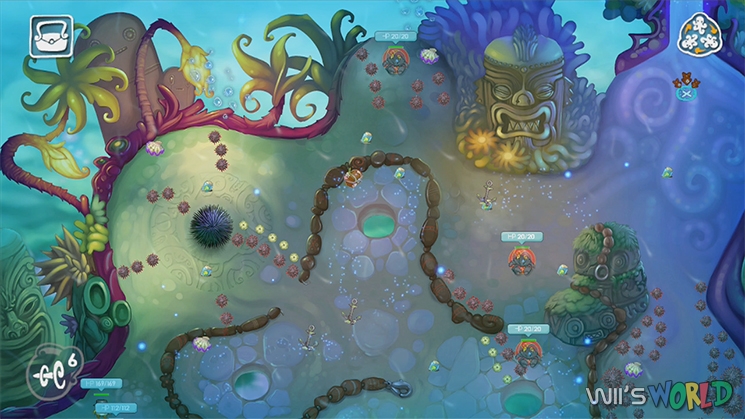 As a tactics RPG, SQUIDS Odyssey is perfectly decent. Players can bring four squids into combat for each level; sometimes the squids are chosen for you depending on plot, but more often you determine your own party. You can choose between scouts, troopers, healers, and shooters. Shooters can shoot enemies at a distance with a gun, troopers pound against the ground to send enemies flying into sharp environmental objects, healers do the obvious and heal, and scouts can dash to keep moving extra distances without using up energy. Each class has its own benefits, but personally the scouts ended up being the most useful for me. Being able to propel the squid forward continuously after having already using all of my move counters helps not only score damage combos against enemies, but is also useful to keep turns to a minimum.

Energy is what squids use in order to move around a level's environment. Aim your squid and shoot it at an ooze-infected enemy to deal out damage or just explore around and collect treasure or pearl loots. How much or little energy you use from the energy circle around each squid determines not only how far your squid will propel itself in a given direction, but also how hard it will hit an enemy. Once all of the energy is used up from the energy circle, the squid can no longer move. If you have a shooter or trooper squid though, they can still perform their special attacks.

Paying attention to a level's environment is equally important, which is as it should be for a tactics RPG. Most levels contain treacherous areas squids can fall off from; those squids who fall will be KO'd for the remainder of the level, unless you have an item to revive them. Strong currents will also try to pull your squids in directions you may not want them to go, so unless you take advantage of the anchors your squids will hold to stay in place, you'll need a scout to fight past the current to get to the other side. Another environmental hazard you may run into are explosives. Naturally those will be just as happy to blow you up as well as the enemy. 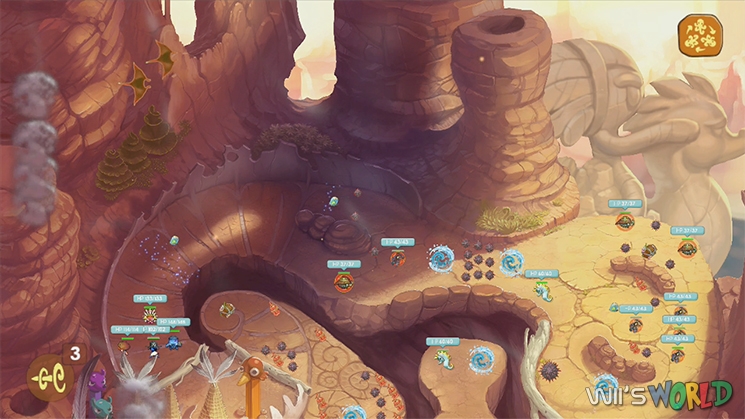 Various items are scattered around levels to help give your squids a boost over any opponents, such as fruit drinks, hot dogs, or shells which help restore energy or protect squids from damage at the end of a turn. You also can use items from your inventory, which may include healing items like the fruit drink or hot dog, but also weapons like the shuriken or Kraken, a super-weapon which will knock every enemy's HP down to 1.

Most levels don't have a maximum turn amount that you can't go past, but some do. In either case, players can earn bonus stars for completing levels in a certain number of turns, for finding a hidden star in the level, or for preventing squids from dying. These rewards translate into pearl drops, which can be used to purchase new items in the shop.

The shop itself seems to speak strongly of SQUIDS' mobile origins. Customization and equipment is simple and streamlined, but perhaps a bit too much so. Each squid is able to wear the same equipment as its fellow class squids, with each piece of equipment carrying its own bonuses such as health or class-specific skill improvements. But, the minor problem comes, for example, when you gain a squid mid-way through the game. You'll have to go through your inventory and equip everything that you have for other like-class squids in order to transfer those same skills to the new squid. It gets tedious pretty quickly even though it's a small annoyance. Also, the interface for the shop has some redundant buttons; you can either click 'transfer skills' or you can press 'Y' to transfer skills from equipment to the squids. The design of the menu is simple, but ultimately the system itself lacks much depth. But, maybe it doesn't really need that much more to it. It works for what it is, but you can't help walking away from it feeling like the equipment and squid levels don't matter as much as they should. 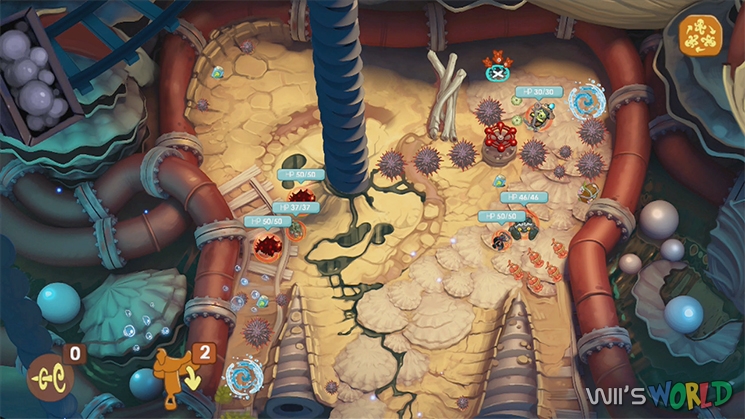 The equipment itself doesn't really have a class system; for example, in RPGs you typically start with leather armor and then work your way up from there. Here, the different pieces of equipment serve more to provide different appearances for characters. Put a goggle helmet on main character Steev or have him wear another character's war chieftain headdress. Some of the equipment is fun, like the Skyrim inspired helmet for the troopers, but largely the equipment is for aesthetic purposes only. You transfer its power to the squid and then it doesn't matter what you wear. Nice idea for customization, but at the same time makes the equipment redundant. Functionality over appearance, right?

But going back to the plus side of what SQUIDS offers, the game has plenty of extras for players who may otherwise breeze through the main story, which strangely gets exponentially shorter and shorter with each chapter you complete. If you do more extra quests, you can find new seahorse steeds, new recruitable squids, and special helmets. Seahorses can help you navigate through a level faster or deal damage to an enemy that otherwise would be invincible. Most, if not all, of the seahorses are available only through completing bonus quests in each chapter. You'll also find new recruitable squids in these levels, some of whom won't automatically join you unless you recruit them in-level.

Some of the special quests can be difficult, but on the whole SQUIDS keeps its difficulty to a moderate level. If there is any real complaint, it's that the game has a bug where on numerous occasions the only thing I could do during a squid's turn in combat was rotate it around with the GamePad's left stick. It couldn't actually move or attack. Usually that bug was fixed by skipping to the next squid's turn, but sometimes I had to completely restart my Wii U system.

SQUIDS Odyssey is an easy game to recommend despite its flaws though. The idea of an RPG about squids is creative, and while the story transitioning needs considerable work, the gameplay is fun. Hopefully some of the glitches don't show up in the Nintendo 3DS version, but otherwise the game is entertaining. The music alone is worth it, guaranteed to lift your spirits even if you're in a bad mood.