Scram Kitty and His Buddy on Rails

Scram Kitty and His Buddy on Rails review

Diamond in the rough

Scram Kitty and His Buddy on Rails is a platforming rail-shooter by Dakko Dakko, a small developer based in South Wales, UK.

It brings an approach to platforming that I can only compare to Super Mario Galaxy if it were 2D, as it uses a lot of circular platforms and gravity effects. Early on you may become disoriented, but after a little play time you develop an eye for the jumps, becoming much more capable. Which is good because the difficulty will ramp up fast and stages will require great precision to advance, let alone collect every kitty on a given level. 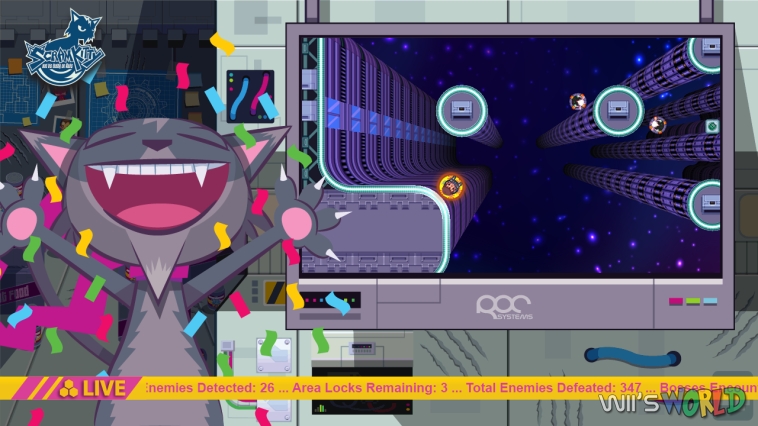 The shooter aspect is there, and while it takes a back seat to platforming, it can be very intense at times as enemies flood the screen. Fortunately, your character is well equipped for all manner of combat, with a powered up bounce jump to plow through enemies that get too close and several different weapon upgrades spread throughout the stages. You cannot manually aim and must find the proper positioning and weapon type for the situation, while dodging enemy attacks, making for hectic arcade-like action.

Graphically, the game is somewhat stock. However, Dakko Dakko has made the bland, but colorful, environments really stick out by going the extra mile with good use of parallax scrolling. Instead of throwing up a black background and calling it a day, the parallax layers create a nice 3D effect that is far more pleasing to the eyes.

The only complaints I can make about the game involve controls and sound. The controls are almost rock solid, but they're somewhat unintuitive at first. Instead of using all directions, the game could have gone the route of clockwise and counterclockwise rotation being assigned to right and left respectively, and would have been better for it. As for the sound, the music fits but it's not memorable at all. After hours of playing I couldn't even hum a little bit of the music if asked. It leaves the mind as soon as the power is off.

Overall, Scram Kitty and His Buddy on Rails is a great game that's different from anything else the Wii U has to offer, and well worth the purchase. It may have some areas that come across as bland, but the gameplay is intense and satisfying with tons of replay value for the completionists out there.