Is this game different enough from the rest?

Spot the Differences: Party! is a game on the eShop for the Wii U that is both fun and entertaining. Forcing you to use your observation skills and with a competitive multiplayer component, this game is enjoyable for anyone who loves challenging puzzles with friends.

In this game, you have to spot five differences in the photographs that pop up in front of you within a 30 second time limit. While this may not sound difficult, when the last few seconds start ticking loudly you'll find yourself frantically searching the screen for any trace of a clue to click on to get that extra point. The first noticeable thing about this game is that the pictures you are given never seem to repeat. That's because there are 360 of them, which will give you a long time before you start remembering the differences between each picture. They span all sorts of subjects from dogs to sunsets to famous buildings. 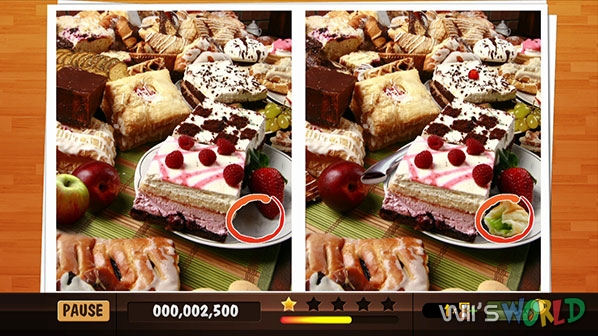 There are two different styles of gameplay: solo and multiplayer. Solo has the player looking at the photos on the GamePad and using the stylus to spot the differences. If the player wants to look at a bigger screen, the picture is also on the TV, but the player will still have to use the GamePad to pick the differences. At the end of each 30 second period, the game will show any differences that were missed. The multiplayer option has two different choices. The players can take turns passing the GamePad around and individually taking on the puzzle. At the end of this, on the TV it compares the times of each player. The other option is for one player to use the GamePad while the rest of the players use Wii remotes on the TV screen. The only problem with this is that using the GamePad makes it a little bit easier to find differences, while the TV has all of the cursors in everyone's way. One of the more frustrating things about multiplayer mode is that if nobody found all five differences, the game doesn't show you where they are and you're left wondering.

One thing that might improve the game would be to allow players to choose the level of difficulty. The way the game is set up now, you can get any type of picture. Some of the pictures are very easy while others are extremely hard. If there was a way to pick the level of difficulty you wanted so that people who weren't as good at spot-the-difference games could slowly become better, it would make it a better experience for everyone.

The music is very relaxing. It sets the mood for looking through all of the photos. However, when the timer starts getting low and the ticking starts getting louder, your pulse will most likely go up because of the feeling of suspense the music causes. If you don't find all of the differences within the time limit, then a very sad, dangerous song plays, making you feel terrible for not succeeding and making you want to try again. 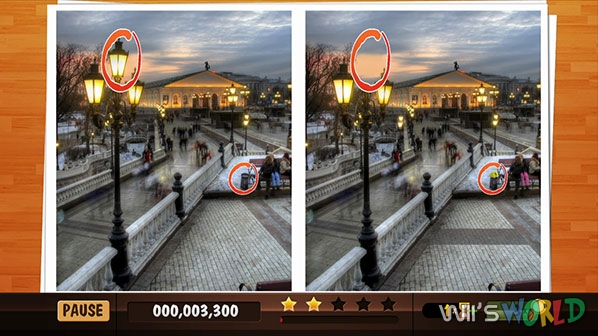 It's hard to say what the graphics of the game are since it's mostly made up of photographs. Every picture has a title and the name of the photographer underneath it. They're high definition, colorful, and enjoyable to look at.

Spot the Differences: Party! is a game that will keep you playing with your friends for a long time. While there are some hiccups in the gameplay, it is definitely worth giving a try. However, it is all in the name; this is a game you will want to play at a party rather than alone.