A party pooper or a success?

It's pretty surprising that Mario has gone through 8 Mario Parties in the past 8 years. Thats one Mario Party each year. The past 6 Mario Parties have received some negative reviews, mainly because of boring and uncreative minigames. Mario Party 8 however, does quite well with the new motion-sensing controls.

The basic story is that a new carnival has come to town, and it's hosted by this flying dude who is really, REALLY annoying. He will take you through certain boards and he'll decide on the winner at the end of the game. 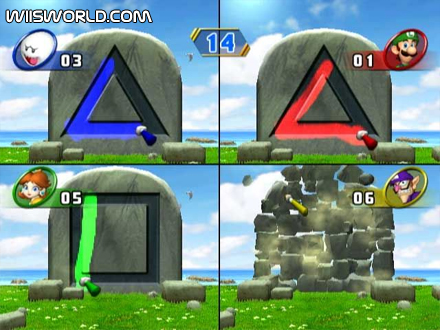 If you're new to the Mario Party franchise, the way you play is similar to that of a boardgame. The goal is to receive as many stars as possible, and usually you must spend a certain number of coins to get them. Candy will allow you to steal coins, move faster, or just really annoy your opponents. After everyone's had a turn a minigame is played, and the type of game depends on what color space you land on.

There are over 70 minigames and each one usually lasts around 30 seconds. They usually have very good controls and they don't get old. There are also some other "tents" (sections in the menu) where you can play extra minigames (such as ping-pong) and where you can start single-player mode. Single-player mode is a little boring but the 4-player experience is one of the best you can experience on any console.

Graphics are slightly better than a gamecube title, but they look really clear. The worst part of the game is the sound, which gets really irritating and the character voices are just annoying.

Overall, I would only buy this game if you are ready to play with more than just yourself.