Sam Fisher is the new Bond. The new BALD Bond.

This game has been A LONG time coming, it being announced just after SP3 came out. A lot of fans have been waiting, which means Ubisoft is under a lot of pressure.

Luckily, Double Agent is good. Very good. The game starts off with Sam being thrust into a mission where you have to jump out of a plane on a surprisingly weird camera angle. Anyway, you're playing follow-the-leader with a noob agent, who sounds like he just got out of training. 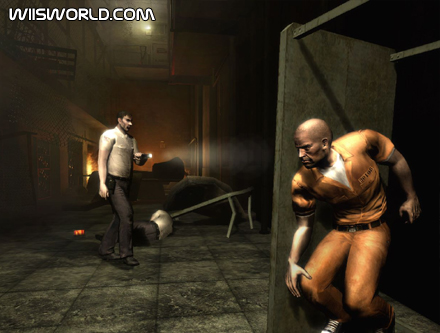 You will notice the night vision and heat vision have been changed slightly, but most noticeably the HUD has disappeared. The only thing to represent weather you're visible or not is the color of it. Which, takes a bit of getting used to, especially to me because I was a die hard Chaos Theory fan.

After you're thrown into the bad-guy base to become a double agent, you will have to pay attention to your NSA trust bar and your JBA trust bar. If either one of them runs out, you loose. You'll have to go back to the last checkpoint. This was quite a problem for me, because every time I got caught doing something bad, my JBA trust would go down and I'd have to do it over and over until my trust ran out. Then I got really mad. It works the other way too, if you don't do that bad thing your NSA trust will go down. So by the end of the game my trust was VERY low. But, after you've gotten over it you realise how fun the game really is.

It could utilize the Wii-mote a little better, but it still does a good job. The missions are a little different than the other games. A lot of them are in the middle of the day. Most of the weapons make a return plus a lot of new ones, most of them from the JBA. The AI is basically the same as Chaos Theory, which leads me to the end of this review, this game is basically Chaos Theory on Wii, with some great new added features. But, who didn't like Chaos Theory?