Trauma Center: New Blood is the second medical simulation on the Wii developed and released by Atlus.

First off the gameplay is mainly the same as Second Opinion. But what separates it is the co-op feature for every mission that allows a friend to jump and help do the dirty work. The co-op feature works real nice and can be a lot of fun. Overall it can also make the game a lot easier because you only have to deal with half the load. Also online scoreboards were added so that you can post your score from different missions to show off how fast your hands really are. 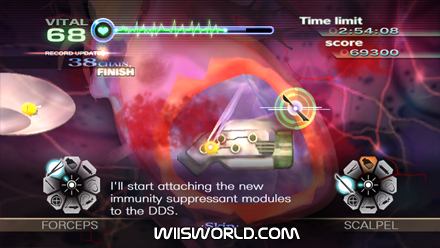 The graphics are in the same anime style that the first game was done in, but when playing and looking at the characters of both games you can tell that the designs are more unique and a lot more time was taken to create each person or organ.

For the most part, sound is improved in the bleeps and bloops of the game. Plus Atlus finally got it straight in the way that there is full voice acting for each character.

Overall the lifespan New Blood is really high. The multiple levels of difficulty will take you time to master, plus the co-op mode is really well done to sidetrack you from the main storyline for hours. The main story itself is longer than the first Trauma Center too.

In conclusion, if you played Second Opinion and enjoyed it, New Blood is a game you'll enjoy and play for hours, a purchase is the best way to go. If you never played a TC game, New Blood is a hardcore medical simulation that will challenge your hands, nerves and patience in many modes of difficulty!