Published by Aksys, Developed by Gaijin

Initially released as separate games for the WiiWare download service (and later sold as a collection on disc) - the Bit.Trip Saga allows for the first time ever, 3DS owners to play a solid collection of one of most fantastic games on the Wii market.

From the simple pixel art aesthetics, gameplay and soundtrack; the Bit.Trip Saga is all about recreating that 80s arcade vibe, through not only similar visuals and gameplay, but by also mixing in some modern gaming principles to create something truly unique and (in short) awesome. 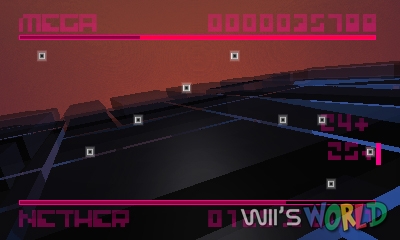 In this collection, there are around six games in total. Whilst they all may vary in gameplay, they all carry with them that 80s retro feel, and take with them the core aspect of what made the golden age of gaming for what it was; a surreal experience accompanied with immersive and addictive gameplay.

In Bit.Trip Beat and Flux, you play levels set upon similar design aspects of the game Pong, by controlling a paddle and repelling beats that only increase in difficulty through odd and misleading patterns. Bit.Trip Core has you manipulating the d-pad to fire lasers to eliminate beats, that also come in increasingly difficult patterns.

Bit.Trip Void has you controlling a black dot to collect other black dots; whilst at the same time avoiding a barrage of white dots. Bit.Trip Runner puts you in the shoes of Commander Video; running through various obstacles to get from point A to point B. And finally, Bit.Trip Fate sees you play as Commander Video (once again) on a shooter path to take on various enemies and bosses. 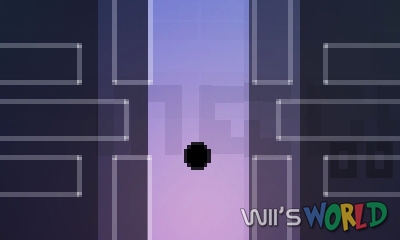 Though simple as they may sound, don't let the overall gameplay and design aesthetic fool you. Each game within this collection comes packed with their own level of difficulty, and require responsive timing and good hand eye coordination. High scores are everything with the Bit.Trip Saga, so you better work for them.

Combined with this too, the soundtrack also adds to the game's experience. Serving as a mechanic for each game, this is where the Bit.Trip Saga differs from other arcade titles and utilizes its soundtrack to serve an even greater purpose. Whether it would be collecting beats, avoiding an obstacle, repelling one back or even being attacked; each action (in one way or another) corresponds to the player's movements, and drives the track into a new direction depending on how well the player progresses.

Few minor complaints of course are evident within this title. For instance, being a direct port from the Wii version, the presentation of these games scaling down onto the 3DS left me with sore eyes. I think out of all the games, Bit.Trip Beat and Core were the prime examples, as the obstacles themselves were often too small to focus on, or were just blending in too well with the colors in the environment. 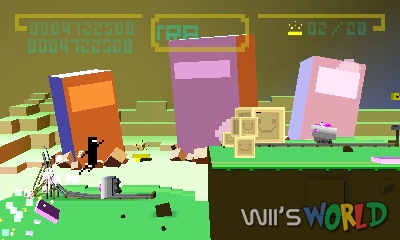 As well as this, there are no online leader boards; so unless you're the kind of person who wants to take photos of your highest score (through your iPod or something), you're mainly competing against yourself.

But aside from that, the 3DS version of Bit.Trip Saga is still a nice recommendation. Whilst it may lack some features from its Wii counterpart (no extra levels or online leader boards), it's still a worthwhile purchase for anybody new to the series and looking for a good set of arcade games.