Take Aim at a Timeless Adventure!

Some 25 years after the original Kid Icarus game for NES captured the hearts and imaginations of gamers worldwide, Kid Icarus: Uprising brings the action and adventure of this beloved series to new heights - and new visual dimensions - on the Nintendo 3DS system. The dark goddess Medusa and her Underworld Army have returned, and they've got their sights set on the heroic angel Pit. With the aid of Palutena, goddess of light and guardian of the human race, Pit must fend off this malevolent threat. The richly immersive graphics of the Nintendo 3DS system offer incredible depth as Pit battles enemies by air and by land.

Kid Icarus could be considered one of Nintendo's most neglected franchises, having gone without a game in 21 years. Though there had been rumors of a revival on Wii and even Gamecube, nothing was definite until about two years ago, when Masuhiro Sakurai showed the project he had...read full review 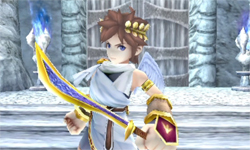