For those of you who missed out on the Wii edition, Nintendo has decided to double up on Donkey Kong's latest adventure which is now available for the 3DS. Donkey Kong Country Returns 3D is a moderately tweaked port of Retro Studios' source material that adds just enough to warrant a second play-through for DK vets and sets the stage for new players at the same time. So whatever your skill level you will be sure to enjoy some hardcore primate platforming.

Now while Returns remains the same core game that appeared in 2010, the changes present in the 3DS version are both hardware based and content based. Let's look at how you'll play the game first: 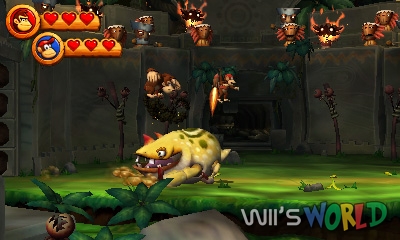 Since Donkey Kong Country Returns featured extensive use of the Wii's unique motion controls, certain actions such as slamming DK's palms on the ground or blowing out candles/flowers/etc are now mapped to the face buttons. This change scored some major points with me as I personally would much rather use traditional buttons than motion controls any day of the week. Similar to the Mario series, Returns uses a 2 button system where A/B both make DK jump and X/Y allow you to roll, ground pound, or blow based upon if Donkey Kong is standing still, moving or crouching. Pretty simple right?

This almost seems like a no brainer but Donkey Kong Country Returns 3D looks great in 3D. You really get a good sense of depth as Donkey Kong and Diddy swing through the multiple layers of background and foreground platforms. The only issue with this is that on some occasions the character you're controlling will appear really small and it becomes difficult to really see what is going on around you when you naturally want to squint and you have the 3D effect on full blast. But those occasions are few.

Returns also runs at a lesser frame rate than the original Wii version. Now your mileage may vary with this one but if you are picky about frame rates there are a few side-by-side comparisons out there on the YouTube for you to investigate. 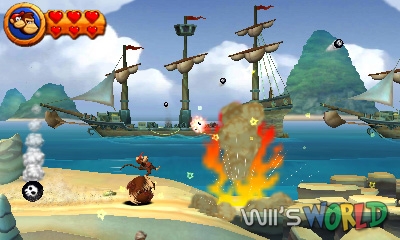 Content wise the major draw of Donkey Kong Country Returns 3D is "New Mode" which serves as an easier and more accessible adventure than the original game, which was at times very frustrating for some players. In New Mode Donkey Kong permanently has 3 hit-points upgraded from the original's 2 and Cranky Kong's shack shop now offers more items that can make levels a bit more slanted in your favor. A crash guard for those dastardly mine cart and rocket levels for example, a balloon that saves you from pits and a mobile Diddy Kong Barrel you can summon wherever.

Also, a whole new set of levels await those who complete the game, and for die hard DK junkies that's incentive enough to grab this version.

The game itself is a very well designed platformer that tasks Donkey Kong with collecting his stolen banana horde from a gang of Tiki-mask idols who have hypnotized the usually docile animals of Donkey Kong Island. Like previous entries in the Country series, levels are built around the various locations found on Donkey Kong Island and each stage is full of collectibles and secrets that really extend the game's lifespan. 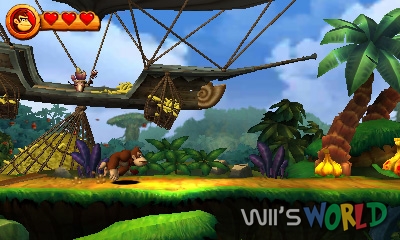 Donkey Kong and his enemies are very well animated and fit well inside of the many unique and detailed backgrounds. Some levels dim the lights and drop all the imagery in favor of simple silhouettes that elevate the game design to a much more artistic level. Very eye-catching.

As visually appealing as the game is, the graphics are wonderfully complimented by a fantastic soundtrack that features plenty of tracks that veteran players will be very familiar with. Overall the game has a great presentation and there will be many sights and sounds that are sure to hit gamers right in the nostalgia.

For those of you not in the know, be warned: Donkey Kong can be a very difficult game at times. Almost any given level can become surprisingly hectic with less than a moments notice. This game comes with Nintendo's "Super-Guide" feature that activates once you've lost enough lives on a course. Players will be given the option to watch the computer take over as Donkey Kong and progress through the level on the correct paths. The intent of this system is something along the lines of "monkey see, monkey do" but since the Super-Guide allows you to practically skip over difficult levels it becomes very easy to abuse the system into passing any stage that rubs you the wrong way.

Overall, Donkey Kong Country Returns 3D is a great game and it is a very welcome addition to the Nintendo 3DS' expanding library. If you missed out on the fun the first time, or you would like to replay the game with better controls and more levels then this is a prime time to pick up this knock out platformer.