Over the last decade Kingdom Hearts has taken the concept of creating an action adventure role playing game set in-between the worlds of Disney and Square and created a complex story that spans across several spin off games for almost every handheld. Kingdom Hearts 3D: Dream Drop Distance is the latest installment and attempts to find a middle ground between friendly adventures set in colorful environments and a increasingly philosophical plot.

Playing as both Sora and Riku, gamers have the ability to swap out which character they are using on the fly or by running out an in-game clock that puts the current character to sleep while the other continues on. This was a very interesting choice as more often than not players would just pick one character to run through the story mode first and neglect the one that appealed to them less from the start. This way, you can play one side of the story and then hop over to the next, and there aren't any sort of limitations to how much further or behind Sora and Riku can be in relation to each others storylines. Dream Drop Distance really gives you a choice to play how ever you like. 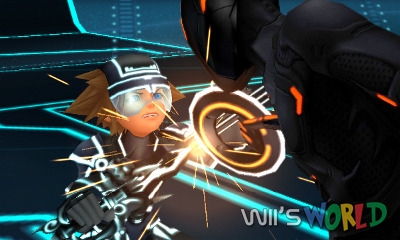 Instead of having Disney characters act as your NPC teammates, New creatures known as "Dream Eaters" serve as not only the game's companions, but enemies as well. Unlike previous Kingdom Hearts games, in Dream Drop Distance any monster you defeat can be raised to be an ideal partner. A lot of work has been put into the Dream Eater system and it has sort of a Pokemon feel to it. Sora and Riku can each have two active Dream Eater partners and one benched monster to leech EXP from the other pair. Dream Eaters level up from fighting alongside our heroes and through touch screen mini games. As they level up and gain EXP you can gain new stat buffs and abilities from each Dream Eater's unique skill tree. Dream Eaters are made from a recipe system that relies on enemy drops and treasure chests so unlike some RPG's you almost always feel some kind of reward for exploring.

Kingdom Hearts 3D: Dream Drop Distance takes place in the "World of Dreams" where seven worlds have fallen into a state of slumber, which has not only disconnected them from the universe at large but also dislodged them from time. Sora and Riku are tasked with awakening these worlds in order to attain the title of Keyblade Master. Of course in true Kingdom Hearts style these worlds are primarily based on Disney films such as Tron Legacy, Fantasia, The Hunchback of Notre Dame etc with some original settings such as Traverse Town appearing as well.

While these worlds are for the most part unique and each has its own feel, some levels do blur together, most notably Notre Dame and the Country of the Musketeers. Sora and Riku usually explore different sectors of these worlds but often their experiences overlap such as in Traverse Town or not at all as in Pranksters Paradise where Riku is confined to the colorful innards of Monstro the whale. 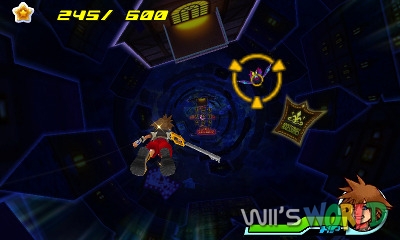 Kingdom Hearts has shown up on the Gameboy Advance, Nintendo DS and PSP previously and not until Dream Drop Distance has Square been able to so closely emulate the control scheme of the series' PlayStation 2 roots. Players can jump, dash, attack and preform special actions with the face buttons, control the game's camera with the shoulder triggers (or use the Circlepad Pro) and select items/magic/special moves from the context menu using the D-pad. Dream Drop Distance makes use of the touch screen by introducing unique specials that can be performed under the right circumstances. No matter how intense the gameplay gets on-screen it is never difficult to control and the game handles very well for a fast paced action adventure.

Aside from raising and collecting Dream Eaters other mini games involve battling against other teams of Dream Eaters in a touch screen completion that plays out like the card game War. There is also a Drop mini game where Sora and Riku race downwards through a portal in order to access the sleeping worlds. Other portals inside of the worlds offer special missions and these portals can be exchanged to other players via Streetpass.

The game is presented very professionally and is a great example of what the Nintendo 3DS is capable of. Gameplay runs smoothly and the graphics are bright and well animated. The music is catchy and influenced by both classic Disney films and Kingdom Hearts' own iconic score. 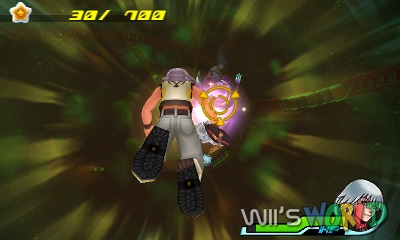 While the game's story can be a bit stressful, it is worth playing through this adventure to get a better idea of where the series is headed. Many of the worlds have self contained plots that lend themselves well to a portable experience making it easy to pick up and play for as much or as little as you want without wondering who every single person is or where you need to go.

Overall Kingdom Hearts 3D: Dream Drop Distance is a well designed handheld adventure RPG that brings the legacy of its predecessors to the Nintendo 3DS brilliantly. It is rich in content and has a level of variety not present elsewhere. Fans of the series will no doubt embrace it and those who have missed a few installments of the Kingdom Hearts franchise can easily find themselves back in the mix of this Disney/Square adventure. With precise controls and deep gameplay, it's any 3DS owners dream game.