Granted a boost in consumer interest from fans, anime-derived games don't usually need excessive polish or depth to sell. The hardest of the hardcore Naruto fans will likely buy whatever products they can to validate their interest. It's a wonder, then, that Naruto Powerful Shippuden manages to maintain a substantial level of competency, despite a few flaws and shortcomings.

I'll begin this review by noting that I have next to no experience with the franchise. Despite watching anime and reading manga for years, I've generally avoided Naruto on the basis that its tone simply doesn't appeal to me. So if you're a Naruto fan looking for a recommendation based on how well the game treats your kind, I'm sorry to say that I can't really help you. What I can do is evaluate the game's content. And I shall! 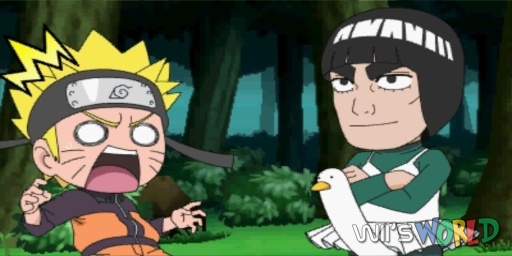 From the get-go, the most immediate realization you'll likely have with this game is that it's flowing with lighthearted charm and humor. Many mainstay (I think?) characters are present but in a new, deformed presentation with enlarged heads and shrunken bodies. I'm not sure it quite qualifies as Chibi, as their other proportions (including facial, limb-to-torso, etc) remain the same. But it is strange, and admittedly a little cute.

In general, though, this is by no means a serious take on the world. It's obvious that a lot of effort went into lightening the tone and giving fans the occasional inside-joke wink. A lot of characters from the show make appearances, and oftentimes the game intentionally breaks the fourth wall and plays the let's-be-meta game. It's not awful humor, by any means, but I really think it'll only be appreciated by, once again, fans of the series who may enjoy seeing characters from what I assume is a more serious story interact in funny and ebullient situations.

The game separates its adventure into two branching paths, one focusing on Naruto and the other on a cheery bloke named Rock Lee. Neither storyline is particularly enthralling, but with the aforementioned lighthearted tone, you really shouldn't expect gripping drama. Based on the situations presented, I can only say that fans will definitely be serviced. 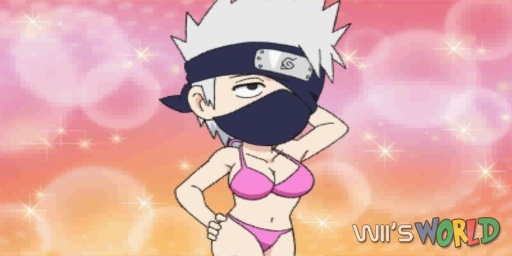 Of course, I should discuss the gameplay itself. Essentially, Naruto Powerful Shippuden focuses on side-scrolling, combo-ridden action in the 2D realm. That paired with the two divergent storylines give this game an eerie resemblance to Muramasa: The Demon Blade, which is among my top three Wii games of all time. However, it manages to remain tastefully unique by focusing on individual challenges instead of a flowing, continuous game world. Each stage has a very specific goal and you can adjust the challenge to include specific additional bonus criteria. Like Muramasa, the game uses an XP system but unlike Muramasa, that XP doesn't get dumped into a linear leveling system. You get to choose where the points go, and your options are numerous.

The action itself is built around a relatively simple system of combos and blocking, with special attacks that drain from a chakra bar. Controlling the characters is smooth and fluid, but the action can occasionally be excessively hectic and overbearing. Putting your points in the right areas ensures that you'll do fine, but it is important to note that several of the challenges can lack sufficient explanation for completion.

One thing Naruto Powerful Shippuden surprised me with was its presentation, as the 2D sprite animation is quite exceptional. While the action in the story cutscenes leans towards the dry and motionless side of the spectrum, the character action paired to the gameplay is lively and varied. Characters move with excellent exaggeration and, well, character. Enemies are colorful and unique, even if it's obvious that there are a number of simple color swaps at play between enemy types (they at least all have generally different move sets). The only issue I can think of here is that 2D sprites don't really mesh well with the non-cel-shaded backgrounds. Like in Fire Emblem: Awakening, it makes the 2D characters feel slightly out of place. 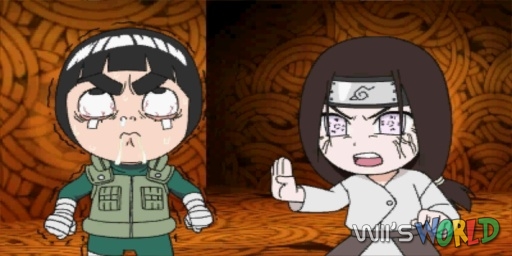 The game's music and sound generally manages to impress, with a number of tracks standing out. At best, the music is catchy and occasionally even soothing, as with a specific track that uses shamisen to set a relaxed and distinctly Eastern feel. At worst, some of the tracks fall into obscurity and neither enlighten or perturb. Voice acting is solid, but it's worth noting that only the Japanese voices make an appearance, and it only occurs during gameplay when specific actions are taken or when the player is damaged. The story cutscenes remain ominously void of spoken dialogue. Sound effects are punchy, if not a bit repetitive.

On the whole, Naruto Powerful Shippuden attempts to capture your heart with its cutesy style and engross you in exciting gameplay. While most would assume that its connection to the Naruto franchise forever banishes it to the realm of inadequate license games (especially handheld license games), this is a game with a wonderful energy and a strong adoration for its fans. You won't get deep insights into the workings of the Naruto universe, nor will you fully understand and appreciate the humor without having watched the series or read the manga. But there's a fun game here, and it should be applauded for its competency.

Hopefully they'll remember to spell Naruto's name right on the cover next time, though.

This game was given to me by Namco Bandai Games America for the purpose of this review. Other than that, no money or swag exchanged hands.