Published by Namco Bandai, Developed by -

This ship sank before it even set sail.

Rocksteady's Arkham series and Traveller's Tales' LEGO iterations have become favorites in recent years when showing that licensed properties do not have to always be bargain-bin material. Especially when thinking of those games as a One Piece fan, it's easy to get excited for the prospect of a quality One Piece RPG. Great story, the opportunity to battle using the unique abilities of each Straw Hat crew member, the ability to go explore the ocean in the Going Merry / Thousand Sunny to look for treasure - the potential is all there. Once Romance Dawn is loaded in the 3DS and the introduction anime sequence plays, it feels like this game should be able to satisfy any fan's hopes for a decent One Piece RPG.

But, unfortunately, things quickly sour from the second players actually select 'New File' and are given command of the Going Merry to land on Windmill Island for episode 1. We're forced to sit through an excruciatingly long introduction sequence with dialogue and scene backdrops borrowed straight from the anime. Character icons appear on the screen showing just that character's head, and any dialogue is displayed through text bubbles. It gets worse when these icons start bouncing up and down to signify who is talking. It gets very annoying very fast, and some of the dialogue is poorly translated. Meaning is still conveyed, but it doesn't sound convincing; it lacks that poetry language has by people comfortable with speaking it. It just seems like translating from the Japanese was an afterthought - and perhaps it was, as the audio itself is Japanese-only. 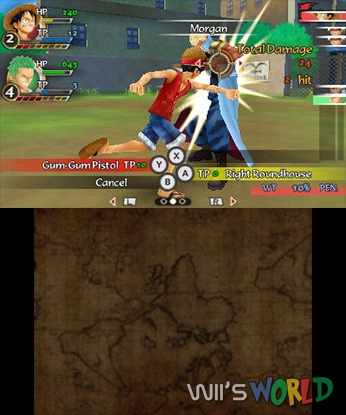 Beyond translation problems and static character heads, the scenes themselves don't always make sure to provide enough context for what is happening. Anyone familiar with the One Piece lore will be able to fill in the blanks. But, there's a difference between this game having a good story and having good storytelling. If anyone wants to be immersed in One Piece's expansive story, don't play this game. You'll get the gist of things, but the drama is simply not there. It plays out more like a 'greatest hits,' and in fact the game is salvageable primarily through the ability to skip these long, arduous cutscenes. They absolutely lack player engagement into the game world. If we want to sit and watch the story, we already have the anime. The game is an opportunity to let players actually play out the story, and yet many of the special locations in the anime, such as Loguetown, Little Garden, the Twin Capes, etc., are simply 'events,' meaning they are not locations players can set foot on and explore. Only areas labeled as 'episodes' can be landed on.

Exploration is more-or-less nonexistent, though the developers seem to have made a small concession by at least including extra islands to land on. Unfortunately they are all virtually the same, outside of varying environment backgrounds. These islands only really serve to provide extra experience points to level characters up or find 'special' items to use in customization. All the locations players land on are like winding mazes, as if this game were trying to be a dungeon-crawler, with not much to do except fight enemies. The only interactivity in explorable areas is being able to kick open chests or destroy crates. Otherwise, exploration is absolutely linear. We don't go inside locations like the Baratie, we don't see people walking around villages. Each island cannot be re-entered, either, without initiating the narrative sequence that played the first time it was visited. This game is not about backtracking. There is no reason to go back to a level to explore and find hidden items; go to a place once and be done with it. The exception here being when bosses reappear on the world map, and players have the opportunity to fight them again.

Thrown in the mix of these levels are also some sequences known as 'Grand Stream Action,' where the player has no control over where the player character runs and must simply give directions based on button-prompts when a turn comes up or when something needs to be broken. Other than making sure you don't get your 'x' and 'y' buttons mixed up, there's not much more to it than that. 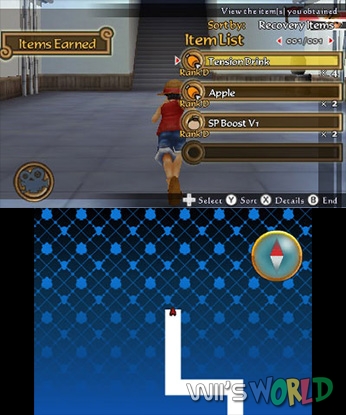 If there is any saving grace to this game, it turns out to be the battle system, but only to a point. Characters do feel relatively balanced; for example, Usopp and Nami will not be as strong as Zoro or Luffy. Each character has his or her own skill set. Care has been taken to recreate the way characters move and how they attack enemies. Even the character models are actually fairly impressive, managing to convey personality.

Attacks can be chained and eventually upgraded using Skill Points (SP), which are earned after battles and by getting 'Overkills' once an enemy has been defeated. Battles can genuinely be fun for a while when using the characters' different powers, especially when facing off against established opponents like Buggy the Clown, Arlong, or even Mr. 2. Although, other battles are anticlimactic, like Luffy's first showdown against Crocodile. Special attacks can be used, such as Luffy's 'Gum-Gum Pistol,' by using Tension Points (TP) which are accrued by attacking enemies and receiving damage.

It does feel arbitrary, however, to have motion-limitations during these free-roam battles. Go outside of the yellow circle and players will have to wait longer before that character can fight again. Go farther out to the red circle and you'll not only have to wait before you can attack but Action Points (AP) will regenerate slower. AP determines how many moves a player can execute in a given turn. If a player really doesn't want to get penalized, you need to take baby-steps. The good news (or bad?) is that the penalties don't really matter that much in the end, making the entire system pointless and easy to ignore. 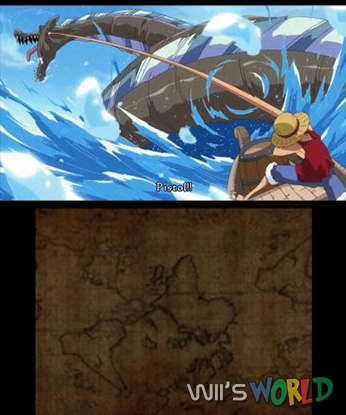 Another mark against the game would be that enemies are not terribly varied beyond reflecting where the player's at in the story. Are you fighting Marines or Fishmen? Royal Guards or Rebels? Each seems like a carbon-copy of the other, so while some moves are different, the bullets have just been replaced by bubbles and then by blades. Enemies are always clumped together and walking aimlessly in a circle until they spot the player or the player initiates the attack. The AI just isn't all that smart, and while players may have some difficulty in a few battles depending on character levels, everything in the game is fairly routine. The bosses are the only ones who really seem to have had time taken out of the day to make sure their move sets were tailored specifically for them and that they were unique.

Still, the battle system is the most engaging part of the game. The developers may as well have just made a brawler and cut out the rest - doing so may have at least made the game somewhat recommendable.

Customization options are available through the foundry on the main map. Hat Memos, Bracelet Memos, pirate flags, etc., can be found in levels and extra islands, and they can be stocked up in the Item Storage for use to craft new items or upgrade an existing item. Items can also be disassembled, as long as the player has a disassembly tool. 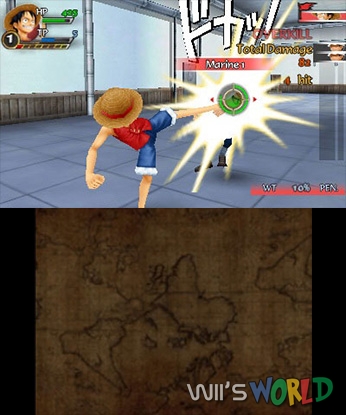 Graphically, this game has its ups-and-downs, but more of the latter. As stated before, the character models are actually pretty decent, though everything is pixelated around the edges and look very rough. The menus and loading screens are clean, but move to the environments and everything is sparse and outlined by rough pixels, making it look cheap. The game gets marked down again on this score because the level designs aren't even close to what players should expect from a $40 game. Environments lack variety and are incredibly plain. Sure, they represent their environments, but take Cocoyashi Village for example; the houses are different colors, but they're still the same house with minimal detail. Throwing in trees every once in a while doesn't constitute an attention to detail, nor does adding simple greens like bushes. It gets to the point where even seeing footprints in the deserts of Alabasta would be a step in the right direction. The levels make sense for what they are - the world is definitely recognizable as One Piece, with its log poses, transponder snails, etc. - but the game design just feels lazy. The game lacks some heart.

The music follows similarly off the graphics. Tracks repeat themselves in each themed area, and until players get into the Grand Line it seems as if the location music will never change. What is included is well-done for what it's worth and at least won't offend ears, but it is not a soundtrack people are likely to go back and listen to just for fun. Outside of some battle themes, the tracks really aren't more than background music. It stands to reason that if this game is supposed to be an RPG, why not pay more attention to the soundtrack? Why not include melodic town themes for the ones we're actually able to walk through? Cocoyashi Village shouldn't sound the same as some generic 'maze isle' located on the world map. The game needs music players want to hear, not tracks that sound alright but get terribly annoying because that's all there is.

And perhaps these generic features of the game show the real flaw: Romance Dawn took on more than it could realistically fit into one small game on the 3DS - and this game really tries to fit in a lot. Unfortunately, the compromises come at the expense of player exploration and story immersion. The developers should have slowed down, created towns that could be explored with their shops, homes, taverns, and let players experience the story first-hand. Maybe even let us freely travel the oceans on the ship. At the very least, instead of trying to tackle so much of the huge One Piece cannon, only go through the first season or two. Clearly fans care about the story, so why skip over an important place, like Loguetown, and make it an 'event' instead of an 'episode'? Even traveling inside of Laboon could have been entertaining as a genre trope; games like having players travel inside the bellies of large aquatic creatures, so why not do that here too?

This game misses so many opportunities, instead becoming too linear an affair. It should have been - and could have been - so much better. One Piece: Romance Dawn is a disappointing game that requires a lot of patience and lowered standards. It doesn't deserve its $40 price tag, but the battle system alone might be worth trying for the most hardcore of fans if this game can be found in a bargain-bin for less than $10. Though it's probably not worth even that much. Otherwise, skip this game. It's not the One Piece RPG fans were hoping for, not by a long-shot.