Pokemon undergoes its biggest evolution yet.

Game Freak have what might be one of the most challenging jobs in the industry. How delicate a procedure it must be to move their astronomically successful franchise onto the most modern of the handhelds - the one that warrants the biggest aesthetic and innovative upgrade from its games - without spoiling a legacy. Compounded with this is Pokemon's status as arguably Nintendo's biggest franchise - did you really think it was a coincidence that an affordable model of the 3DS (the aesthetically repulsive but commercially sensible 2DS) - was released on the very same day? They want and need as many people as possible to buy and play this. Mario is their overall breadwinner, but he did have a twenty-year head start and can still only dream of inciting the reaction in gamers that a new Pokemon RPG can. Yes, to say there's a lot riding on latest installments X and Y is an understatement.

You know the story by now - kid is given starter companion by local professor, leaves home, mauls other monsters for financial gain, gets caught up in conspiracy, almost unwittingly brings down evil empire, collects eight shiny badges from gym leaders, ultimately becomes the very best like no one ever was. If this shocks you, you might be flabbergasted to discover that Super Mario 3D World will involve jumping to hit blocks. That's always been the deal with Pokemon games but, even still, the plot of X and Y pales in comparison to the last generation, 2011's Black and White versions on the DS. Yes, Team Plasma's leader Ghetsis turned out to be a typical evil, power-hungry mastermind, but the story had you questioning, until late in the game, if you were the bad guy in a sort of animal rights activism struggle that even influenced PETA to make a spoof of the games in a real-life campaign. There's little of that balance and depth here; the goofy Team Flare get up to all sorts of nefarious, vainglorious and shallow crimes and you would need to be a bit of a Slowpoke not to twig who their insidious leader is after his or her (no spoilers here) first appearance. It's the elements that frame this story, however, that are the true selling points of the sixth generation. 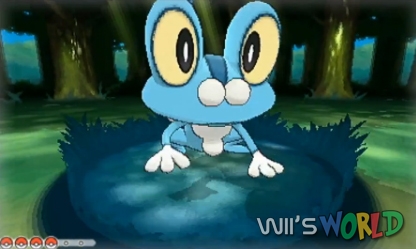 The 3DS bestows upon the Pokemon world a beauty only imaginable until now. Black and White attempted it, but their juxtaposition of pixelated sprites on 3D environments often left things looking tacky. Based on France - to the extent that an NPC mentions cheek-kissing - the new setting of Kalos serves up the most stunning locations seen in the series yet: city streets dotted with cafes and boutiques; a chateau surrounded by majestic gardens; sunny beach resorts viewed from windy cliffs; gloomy fairytale forests with tree branches that reach out like eerie hands; frozen mountains lined with snow-capped pine trees under a starry sky. The latter features perhaps the most evocative, grandiose theme ever to grace the soundtrack of a Pokemon game, and its Zelda-esque vibe also lends itself to the folk tunes of nearby Dendemille Town, while Lumiose City and the guitar-driven battle theme will promptly burrow into your brain to forever sit alongside the timeless tunes of the series. Strangely (perhaps unbelievably) there's no 3D effect in the overworld. It's only employed to make certain scenes more striking but, save for the cinematics of the game's climax, it rarely makes an appearance. There's a touch of slowdown on the frame-rate during battle when the slider is up, and since it offers barely any depth anyway, one might as well play with it off. It's an odd creative decision for a land devised with beauty in mind and especially when one considers what the console can do in terms of presentation, but it's really of little concern compared to the overall stylistic improvement.

It's a whole new world, but the ways of getting around are mainly those of old. Cutting down impassable thorns, surfing coastal routes and shoving boulders to clear cavernous passages are all still a big part of adventuring, but your now-customizable character can move in all directions. Being so used to the X/Y (ironically) plain of movement of all Pokemon games till now, Your Humble Narrator spent an embarrassing amount of time trying to overcome an ice floor puzzle, the solution of which was as simple as sliding diagonally. You'll also utilize certain Pokemon in new ways, such as riding a Rhyhorn over rocky mountain terrain or ploughing through a snowdrift on the back of Mamoswine. It's a nifty idea but thankfully this method of transportation only occurs a handful of times, since their snail-paced stomping becomes a tad tedious before long. Opting for the control stick instead of the D-pad yields some fiddly rollerskates, made doubly frustrating by questionable camera movement in Lumiose City, but movement soon becomes more fluid.

There's a big focus on old Pokemon throughout. With only around seventy new creatures added to the roster, tall grass is teeming with a wide variation of those from previous games. It makes it all the more pleasantly surprising when an unfamiliar face leaps into battle. There are the usual cast of electric rodents, cave-dwelling critters and quirky birds but, as has become tradition, you'll soon be finding yourself face-to-face with more avant-garde, sometimes questionable, designs - a sentient sword, a jelly dragon, possessed pumpkins and, most ludicrously, a magic set of keys. The new fairy type, the first elemental introduction since Gold and Silver in 2001, gives overpowered dragons a run for their money and will leave you biting your lip in frustration as the retconned Marill and Gardevoir shrug off your Draco Meteors. There are also Mega-Evolutions, allowing even established favorites like Charizard and legendaries like Mewtwo to temporarily morph into stronger forms. While some new designs are undeniably slick, it's hard to shake the sense of gimmickry, particularly when it's applied to one-stage characters like Pinsir and Absol who surely merit an entirely new Pokemon to evolve into (the fairy type Eeveelution Sylveon is the only one who stems from a past monster). 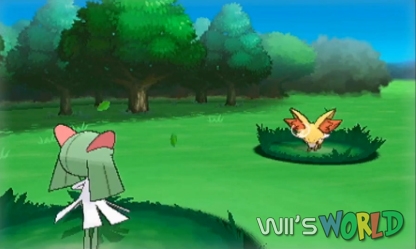 It's not a complete battle revolution (pun intended, no apologies) in-game, but veterans will notice how often their perceptions of old opponents change with the new typing. By the time competitive battling becomes widespread in X and Y it could have a profound effect, and the Super Training mini-game demystifies the nebulous, until now almost hidden concept of EV training, a complicated meta-game that, realistically, one must master to stand a chance when playing online. On that note, a comprehensive bottom-screen menu makes it easier than ever to battle and trade with wi-fi friends and strangers from around the world. The opportunity to send and receive gifts as you play makes palpable the sense of community and connectivity that Pokemon has always thrived on, and it's probably the closest we'll ever see to an MMORPG version of the series.

These editions are a prime example of how the more things change, the more they stay the same. The recognizable elements are all present and correct, but they still manage to feel so new and captivating; so near to what we know, yet so far(fetch'd) from what we could have imagined. It's lots of little strokes that repaint the old picture in a big way. Destined to be two of the definitive titles of the 3DS, this is Pokemon at its most stylish, its most immersive, and the way you've always wanted it.