Published by Sega, Developed by Dimps

Sonic the Hedgehog has had numerous missteps these past few years, but recently the blue blur seemed like he might be getting back on track in making the transition from 2D to 3D. But here's the thing, that's the console version. Unfortunately, the 3DS version of the game didn't receive as much love and attention as the others.

Basically the plot is this: in honor of Sonic's 20th birthday, the rest of the group hold a surprise party for the hedgehog. Without warning, a weird time monster thingy captures all of Sonic's friends and strews them across various worlds that he has also captured. Oh wait, that's the console version again. The 3DS' is similar but Sonic arrives before everyone else to the party and Tails is the only one sucked in. Anyways, the world is in peril by this time monster, the two Sonics and two Tails from alternate timelines meet up and decide the only way to fix the worlds is to run through them at super speeds. The story is riveting I know but the cut-scenes are horrible. While the consoles get fully rendered movies, the 3DS version gets text bubbles, limited animation, and a single square image to show something, say the time monster, or a chili dog. This is one of my first complaints. We all know what the 3DS can do with rendered movies, such as in Kingdom Hearts 3D: Dream Drop Distance and Metal Gear Solid: Snake Eater 3D. So why did Sega cut out on this one? 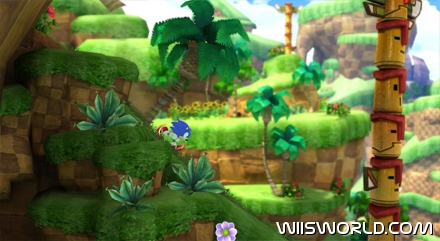 Cut-scenes aside, the gameplay is decent. There are two acts in each stage. Act I makes you use the tubby Sonic that started the Mario and Sonic feud. In these stages, you can spin dash and all the levels are 2D. However, in Act II, you use modern Sonic, who somehow lost the ability to spin dash. While the modern Sonic in the console game ran through 3D environments, in the 3DS game it's a 2.5D world. Sure the camera angle changes from time to time, but you are still moving along a single plane. All you really do in the modern levels is press Y to run at top speed and jump when necessary, stringing homing dash attacks to get more boost. There is literally NO side strafing or anything. It is effectively Sonic Dash on the DS, only not as good. Even old Sonic gets the ability to do a homing attack about half way through the game that you can then do in all the levels prior. Not only is this infuriating, but it makes no sense! Old Sonic never did that so why make him do it now? The special Chaos Emerald levels are worth mentioning but after a while, they get boring as well.

The 3D effect is a nice touch and it's good to see that they pulled it off successfully. Otherwise, this is not one of the greatest games in terms of appearance. Don't let the screenshots of this game fool you, those are the console screenshots. The actual 3DS graphics aren't as great. There are clearly better looking 3DS games out there. Considering what other people have done with the 3DS's hardware, this is another prime example of how Sega didn't put enough time and effort into this game.

Sonic Generations' music and sound effects are another story. The team certainly did a decent job at remixing the old music for this "love letter" to Sonic fans. From the lush melodies of Green Hill Zone, to the water palace of Sonic Dash. But one of my favorite aspects of the console version was once again missing. In the console version, the player was able to mix and match songs. So in theory, they could play city escape with music from Sonic Advance, for example. Considering that it was possible to do this kind of thing in Kid Icarus Uprising on 3DS, you'd think the feature could have been left intact when bringing Sonic Generations onto the handheld. 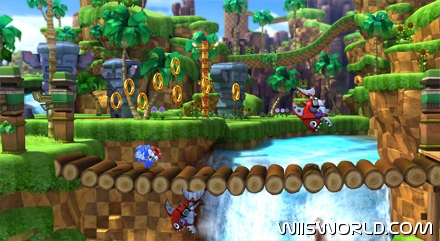 The only replayability value in this game stems from the time trials and online play. And even that's a stretch considering the first level can be completed in under half a minute, even the first level in Sonic Advance was longer than that! There's also Streetpass and online stuff that one can do but there is really no incentive to do it.

All in all, this is a game that dropped the ball. Usually handheld Sonic games are actually better than their console counterparts. But sadly, this isn't the case this time. Don't get me wrong, this game is far from broken, but it sure isn't the "love letter" from Sega that it was made out to be.