The Legend of Zelda: A Link Between Worlds review

A bright future for the beloved franchise.

In 1992 The Legend of Zelda: A Link to the Past set the blueprint for most future installments of the Zelda franchise. It had an easy starter dungeon before throwing you into your quest to obtain the fabled Master Sword that required you to go through three other dungeons. Each of those three were blocked by some kind of object that meant you had to play in a certain order to get to them. Then once you had the Master Sword, one more dungeon awaited before opening up into the real adventure.

It's a formula that has worked with very little deviation. A Link Between Worlds takes that formula but adds enough of its own unique twist that it will be hard for any future Legend of Zelda game to not follow. 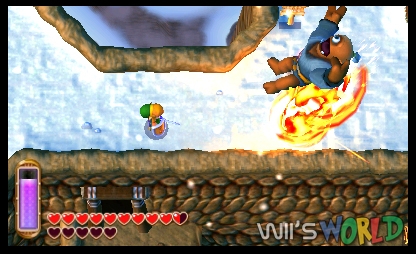 From early on in the game you are able to rent items from Ravio, a rabbit-masked mystery man who decides to take over your home and make it his shop. You're never there since you're off adventuring, so how could you complain? The great part of this rental shop is as long as you have the rupees, you can rent out whatever you'd like. At any time. The only negative: once you die, all of the items are returned to Ravio and you'll have to pay to rent them again. Considering how the economy in the game works this isn't too much of an issue.

What this does allow is nearly ultimate freedom in the world of Hyrule. If you see something you know you need the hammer for, go and rent the hammer and have it with you. You're not limited by inventory space, just the money you have to spend. It's within this feature that the greatness of this game is found. You are able to attack nearly any dungeon in any order that you see fit as you'll have all items at your disposal from such an early stage. Later on you can even purchase all of the items from Ravio, causing the threat of death to lessen some.

There is a downside to it, though. 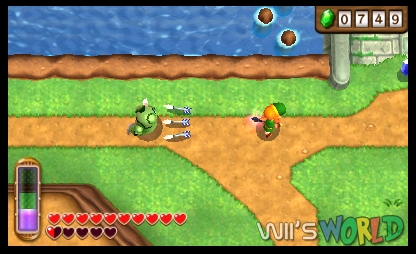 With having access to nearly everything early on, you're only blocked by objects that require you to have items found in other dungeons (like the Titan's Mitt for example). Otherwise, once you have the ability to merge against a wall and open portals into Lorule the lands are yours to take. While a great take on the formula, it also means that exploration is fast and you don't have to linger around wondering how to get past something or trying to remember where certain locations were to use a future item. It honestly makes the game a much faster experience. Add in the ability to own all of the items outright and not have to worry about death toward the end of the game and the pace really picks up.

That isn't necessarily a bad thing given it is on a handheld, but if future installments were to make use of a similar system, they may need to have something in the way of gameplay gates to prevent the title from seeming too short. Clocking in below 20 hours for a Zelda game with nearly everything obtained just felt wrong.

Shortness aside, the game is a testament to wonderful design. Each dungeon makes use of an item or items to great effect. This is accomplished right from the start of a dungeon too as you will often know which item you'll need to have in your inventory before even going in, so it isn't just a hunt in that dungeon for what you'll need to progress. Then there is Link's merge ability. Every time you use merge to solve a puzzle it's hard not to crack a smile at how ingenious the level designers were to incorporate the feature so well. 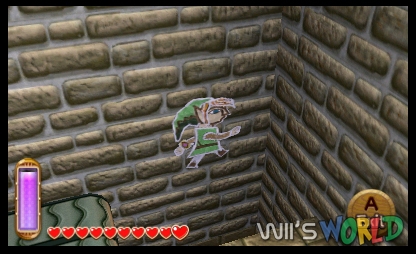 A Link Between Worlds is also one of the best looking games on the 3DS. Hands down. It runs at an almost consistent 60 frames per second, only lagging when particle effects get a little out of hand. This makes for a silky smooth looking game as well as helps tremendously with the 3D effect (the reason for the upgrade to 60fps in the first place). Each environment that was in the original A Link to the Past has been lovingly brought back to life in 3D without losing its splendor. Try walking the path to the Master Sword in the Lost Woods and not have a smile on your face if you've played the SNES classic. It's a wonder to see.

All of the sound cues you expect from a Legend of Zelda game are present and they all deliver in terms of quality and what they aim to convey. What really shines in the sound department is the score, though. Every song that was in A Link to the Past has been redone in A Link Between Worlds with what feels like absolute love for the score. Everything has been given a more orchestral sound to fit what is shown on screen and it works wonderfully. Two things to look out for are how the overworld changes once the Master Sword has been obtained and how fantastic the Dark World theme from LttP has been changed to become Lorule's theme. Really wonderful stuff.

Short playtime aside, The Legend of Zelda: A Link Between Worlds is a game that not only Zelda franchise fans should play, but anyone who has a 3DS and even slightly enjoys adventure games. It's a lovingly crafted game that exudes creativity with its dungeon design and hidden treasures. While it may not be the exact blueprint that future installments in the Zelda franchise will follow, it will be looked at and tweaked until they get there. The future of the franchise starts here and there will be a very bright future to come.