Wrestling. More importantly, wrestling video games. I grew up watching wrestling as a kid, and being a fan of wrestling and video games meant I played a bunch of WWE/F video games. One of these games was WWE WrestleMania X8 for the Nintendo GameCube. In fact, nine year old me received it on Christmas morning 2002 with my brand new GameCube. However joy quickly turned to disappointment over how poor the game was. Of course this was over a decade ago now. I still have my copy and my GameCube so I decided to head back into the ring and give it another go.

WrestleMania X8 was Yuke's first attempt at a WWE game on the Nintendo GameCube. Hopes were high. Yuke's was already well known for the fantastic WWE Smackdown games on the PlayStation systems at the time, but even upon entering the main menu problems arise. 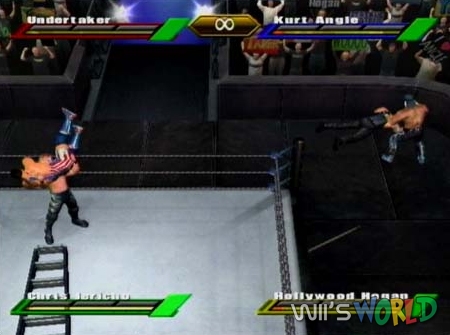 Where are the game modes? The game only gives four modes. This is a huge issue right from the start. The game is lacking already. Most notably missing is a season/story mode. There is such poor choice here that after only a short amount of time you will be bored and wanting to do something else.

The three main modes offered are 'Exhibition', 'Path of a Champion' and 'Battle for the Belts'. The game also has the 'Create a Superstar' option. Path of a Champion is your meat and potatoes here, however it's an incredibly small dish. You pick from six belts and a wrestler and then you simply fight matches against CPU opponents. After four or five fights, you get the belt; that's it. The 'Battle for the Belts' mode doesn't fare much better as it's exactly the same as the 'Path of a Champion' mode, but you use custom belts as opposed to the official ones. You can pick from four difficulties in each mode, but compare this to the Smackdown games which featured a multiple choice, fully playable RPG style story with backstage access. WrestleMania X8 feels so sorely lacking that you'll want to DDT your GameCube.

Graphics are also a problem. The game looks poor, character models are scaled badly and the animations are wooden. This is especially noticeable in the entrance animations. Moves have clipping problems and the clipping is even worse if you involve weapons. On a brighter note, every wrestler has their correct entrance music for that year and they all have their own unique entrances. 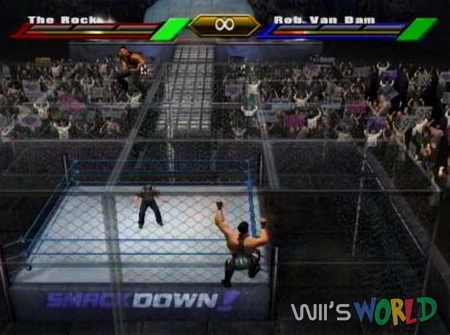 The best and most entertaining part of the game is without a doubt its gameplay. The core gameplay is strong and well implemented. The game uses a very simple system. A is linked to grapples, you can hold A for a strong grapple or tap A for a quick weaker grapple. Each wrestler has five front grapples and five rear grapples. B strikes and L and R are used to counter. The simplicity here is great, it's very easy to pick up, but hard to master. It feels rewarding when you play well and win your match. There are also a great deal of match types to pick from, including Hell in the Cell, Royal Rumble, Triple Threat, Hardcore and a lot of others too. As I stated earlier in the review, the physics and clipping can sometimes be a real annoyance while playing and take you out of the game, but the main core gameplay is really good and it's fun to play.

Even coming back after twelve years, I still have the same gripes with this game I had with it before. The gameplay really shines, but it's surrounded by poor graphics and an insulting lack of modes compared to its main competitors. Of course, nowadays with this game being twelve years old you could pick it up really cheap. If you're a wrestling fan it's worth a go for the fun gameplay alone, but the lack of modes pretty much kills any longevity that WWE WrestleMania X8 could have had.

New on GameCube (US)