This one time, at Space Camp

Allegedly crammed full of "accessible space age mini-games" and options for multiplayer, Space Camp puts you in the moonboots of a wannabe astronaut learning the ropes. 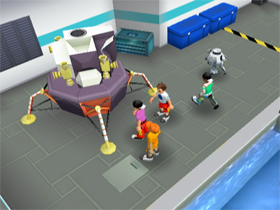 "After rocketing yourself to the moon, you must engage in a series of futuristic, furiously fun missions in order to return home to Earth".

This one time at space camp I stuck a raygun in my..