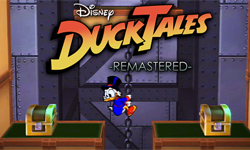 It's less than two weeks before DuckTales: Remastered hits the Wii U eShop and so Capcom has released another promo video showing off some gameplay.

The African mines are featured this time, as Scrooge heads underground to seek out treasure. The video is narrated by everyone's favorite pilot, Launchpad: