Here's another assistant trophy in Super Smash Bros Brawl. It's Andross, a baddie from the Star Fox series.

After appearing he moves to the back of the area and deals damage using tiles that fly out of his mouth. 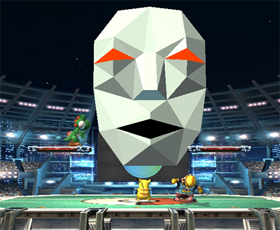 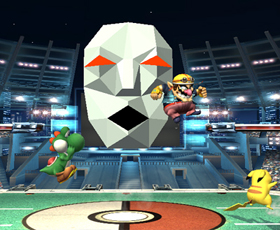 We're in a tight spot. 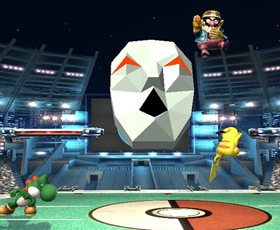 Coo, he jumps pretty high for a plumper. 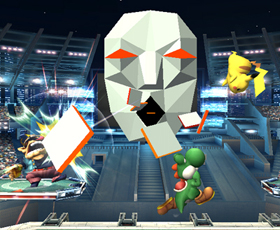 Wa-Haaa, get me a dentist. 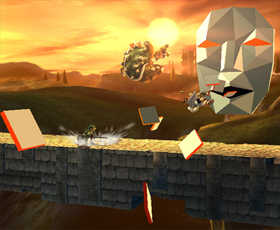 I used to spit rhymes, but tiles do more damage.

It's good having a helper at your side.

Hey, it's ol' Andross from Star Fox 64! Isn't there another update on the Smash website showing Meta Night's special moves? Why isn't it here?

With no relation to this update: Happy Metroid Prime 3 Day.

They're tiles? Why the hell does he spit tiles? There's got to be some explanation. Nice captions too.

Creepy. In a weird way.

That last caption is pure GOLD. But I wonder what Nintendo has got against the 64 Andross? He was awesome too.

I didn't really expect Andross to be an assist trophy.

Great update, I was wondering when we'd get to see Andross in SSB. Keep them coming, Sakurai.

Oh my god, look at the textures and bump mapping on Andross.

Cool trophy. I especially like that they kept him in his old school form instead of making him "new".

"I used to spit rhymes" Word to you 16 bit mother.

Wa-haaaa, get me a dentist. That is funny. Like sony. Heh heh. Sony.

Wasn't expecting this, but does it mean they'll include the more modern andross? They did with the trophies in melee, but just this will do.

The first bad news for ssbb is this one. I hate Andross, especially in this basic form. As assist oh no please, and the other version of Andross will be a level boss please nooo.

That last one is hilarious.

He reminds me of Zordon from Power Rangers, yeah season one - I said it.

He reminds me of phanto.

Do we have to fight against him? And is this a wii-game?