The latest incarnation in the Animal Crossing series has been revealed by Nintendo at this year's E3, it's called Animal Crossing: City Folk and will be playable on Wii.

It will be the first game on Wii to support voice chat, through a microphone device known as WiiSpeak. Rather than being a headset, it sits on top of the TV, having more of a 'speakerphone' effect. Unfortunately it's not bundled with the game, and is sold separately at $29.99. 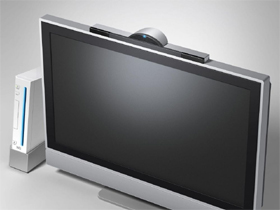 ACers can also connect with each other in some ways using WiiConnect24, like bidding on items at the auction house and visiting Happy Room Academy HQ to view the best rated player houses.

Animal Crossing: City Folk is expected for a Q4 release later this year.

I'm sort of not liking all these addons they're throwing in now, it's like admitting they messed up with the original console and trying to make up for it by making us buy new stuff. This and the 1:1 better be cheap, as in, not making them profits. They're already rolling in it.

I hope that they use this in other games, like the conduit, that would be sweet.

Sweet! I can't wait for this one. Those of you who haven't seen the trailer, have to go see it. And filipedy, you don't have to buy the mic or any peripheral. It's your choice. The mic is just to enhance the experience.

The option should have been there from the start, not 2 years into it's life cycle.

Let's just hope this game doesn't make like brawl and get delayed time and time again.

1) Too Expensive 1) Should be bundled with Animal Crossing. Come on, Nintendo.

Just because Nintendo is making truckloads of cash on the Wii doesn't mean that they have to make the accessories cheaper. They are going to continue to bundle the peripherals with minigame collections and say that you are getting a game AND and a peripheral for CHEAP! Not everyone is going to buy ALL of the peripherals, so saying that the real cost of the Wii is high is not going to make Nintendo budge.

Wii-motion-plus is free with Wii sports 2 and wiispeak isn't free THANK GOD no telle sales employee silly ear peace I like how you can put the mic were ever you want still think ds voice over in Wii games should be a option.

Nintendo better not be doing this for the money, and it should be bundled with animal crossing because that's what its made for right?

Yea. Let other players hear your dad beating your mom in the other room.

This should be bundled with Animal Crossing, on the bright side camp Microsoft and Camp Sony have voice chat for dozens of games, this is Big N's first.