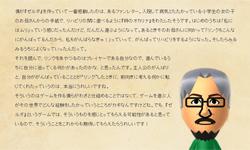 Wants the next Zelda to be "vast"

Whilst Hyrule Warriors is getting a decent amount of coverage, the new main-series Zelda game is talked about less infrequently.

Through Nintendo's Japanese site (and unfortunately in Japanese itself), Eiji Aonuma's words have been translated roughly to explain a little about the new Zelda project - when asked "What is the new Zelda for Wii U shaping up to be?", he says:

"I can't talk very much about it yet, but the overarching theme is re-evaluating the fundamentals of Zelda."

"An example of this is how we want to create a game that takes in a very vast world. Up until now we haven't really been able to create a world where the player could think, "I wonder what would happen if I went to the other side of that mountain?" or "from here it looks like this, but how would it look from the opposite side?". With the Wii U version we want to make it so that if the player wants to, they really can cross mountains and valleys and go to places far, far away."

"Please look forward to seeing how a Zelda game that takes place in such a vast world will turn out!"

More information (if you know Japanese or are curious) is available here.