Shin'en Multimedia, you may know them from such games as Fun Fun Minigolf and Nanostray, has announced a new game coming to WiiWare.

Art of Balance is a physics-based puzzle game with an emphasis on being addictive. Gameplay involves putting objects on top of each other to create a balanced stack. 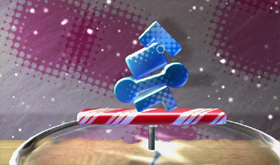 More screenshots can be seen on the Art of Balance page. If physics puzzlers are your thing you might also want to check out Professor Heinz Wolff's Gravity.

Looks really interesting and fun. Instant buy on day one.