Bouncy Bullets out now on Switch 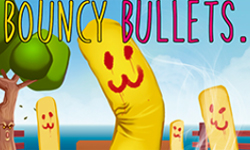 With Ratalaika Games acting as publisher, Bouncy Bullets has now released on the Nintendo eShop and other platforms as well. The price is set at 4.99$/€ for all.

In a world where the sky is blue and water is pink, with icebergs replaced by floating ice-creams, Bouncy Bullets is a colourfully vibrant first-person shooter that will task players to traverse wonderful terrains, in a bid to reach the portal that awaits them at the end of every level!

Getting to the end won't be easy though, since one bad leap, is enough to send you back to the beginning of your current level and if you run into enemies, they will shoot you. To counter this, armed with a gun of your own that's loaded with bullets that bounce, you have the option to shoot first and rescue the occasional friend.

For the players looking for a true challenge however, Bouncy Bullets does feature leaderboards, so why settle for simply beating a level when you can strive to obtain all 3 stars and share your epic skills for the whole world to see?