Firstly, it's official, Super Smash Bros Brawl has been delayed until February 10th for the US release. Sakurai explains this extra development time will make the game as good as it can possibly be.

Today's real update is all about snapshots. Now you can take a snapshot at any point in the game via the pause menu. While paused you can zoom in and rotate the camera as you wish. 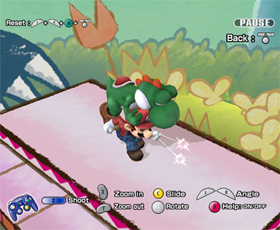 Freeze! This one's a keeper. 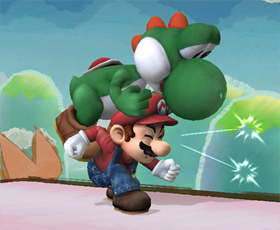 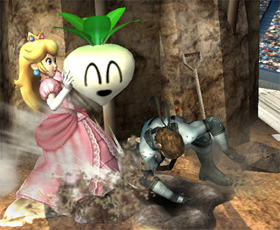 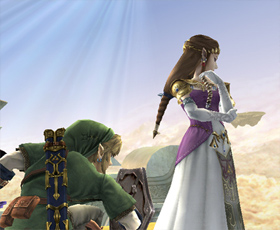 You bought that horse without even asking me. 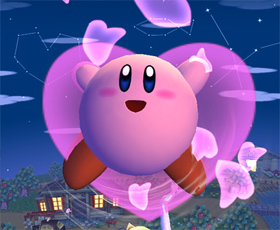 Snapshots can be saved to an SD card or your Wii's internal storage, so you're able to take a lot of them. There's an album feature where you can browse your shots, you can also send them to your friends over Wi-Fi. 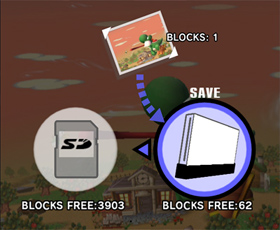 Choose SD card, you know you want to. 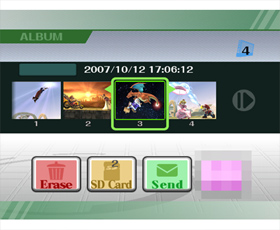 Mysterious pink button, what are you.

At least I'm sure it'll win game-of-the-year for next year. Waiting sucks though. ANTICIPATION.

I know what the pink button is. It's obvious: "Change all colors in picture that aren't pink TO pink".

NOOO this can't be. Brawl won't come out until Febuary!?

I can't belive it, I mean I thought it was impossible to wait until December but now it's even worse! Until February. But hey at least it's like Sakurai said, this delay will only make the game better and plus I really want this game so it doesn't matter if they change the date to 2009 (I really, really hope they don't) and I am still going to buy it.

You know how many more updates there will be?! I guess this is a goo'bad thing. And note that Sakurai said possibly make this game better.

I think I am going to cry. But after thinking about it I would rather have them delay it to make 100 times better than halo 3. This reminds me of one of Shigeru Miyamoto's quotes: "A delayed game is eventually good, a bad game is bad forever". In this case it means that brawl will be one of the best games of all time and we should be happy it is being delayed to make that a fact. Go Nintendo.

AARGGH. I am so mad. The snapshot update was ok. I hated the delay update SO MUCH. I wanted to get brawl on Christmas, but now, I have to wait another extra 2 months.

Cool but I'm still mad that the game is delayed.

If they delay it again, it better be to june because june's my birthday. And I have one more thing. STOP DELAYING. The ultimate holiday game for christmas is ruined.

Oh no. If February is the release date for the US, I dread to think when it's coming out in Europe. Typical, I was looking forward to playing one of the first decent Wii games in ages. I've been disappointed with the lack of quality that's been put into the latest Wii games lately, e.g. Mario Party 8, My Sims.

I won't be one of those people who say "good things come to those who wait".

With the delay (which I hate) might make Brawl the best Wii game ever.

Nooooo. What have I done to deserve this. I have been waiting months for this game (4 months exactly). Oh well they say that "patience is a virtue" I guess.

They said that the game would be out on December 3rd. Yea they said that they try to make the game better, but the waiting hurts everybody. Now on the good side the snapshot thing seems pretty cool. I've always wanted to do that with those pauses I came across. I'm sure brawl will be great but I also hope this decision doesn't hurt Nintendo.

I'm so mad about this. God this ruins my whole year. How can they do this to me.

Aww man I was going to get it for Christmas. At least he'll try to make it better.

Metroid, Galaxy and Brawl all in the same year!? I knew that it was too good to be true. Maybe they need the extra development time to add Master Chief.

I really don't like this update but at least I'll get guitar hero 3 to pass the time.

Yes! Now I can take great pictures in the middle of a heated battle. I've always wanted that because sometimes I get awesome pauses but I can't do anything about them. The funny thing about the delay is that I read about it yesterday in wikipedia. It said "release date: February 10". I didn't believe it but today the site says the same exact date, weird.

This game WILL be mine. Whoever lives in Los Angeles, you get to play it first. Good luck getting in.

This is probably a good thing, because if they delay it, then they'll add a whole lot of stuff. Like characters, arenas, and trophies.

Bah, I was hoping it wasn't true. I was hoping with every ounce of my faith. I guess 'twasn't enough to change the course of the future. Anyone up for a riot?

Ah. We are now behind Japan.

Well, I suppose we saw this coming, since on Wednesday they announced the delay of the Japan version. I figure the probably revealed Sonic then because they figured it would be compensation for the wait. The snapshots thing is cool though. It sucked that you couldn't take snapshots whenever - you had to be in that mode.

I can't help but wonder what freaked Nintendo out enough to make them release this after the holiday season. Economically that is a bad move for toys and games. This is a sad day for many gamers.

Expectations are exceedingly high, so maybe it's for the best. I'm glad that it's running at 60fps though. One question still lingers. How can these games be system sellers when there are no systems to buy!?

I live in Australia. When the release date was like dec 3 that meant it comes out around march in Australia, but dammit two more months.

Considering how long it took to get paper mario over to aussie, I'm thinking I might never get to play this freaking awesome game.

You think they're giving away too much info about brawl? I'm losing my hype.

Christmas is ruined too.

I'll probably play Melee and buy Mario Galaxy to make me forget until Brawl FINALLY comes out. See you 2/10.

Too bad. But that's the cost of an amazing game. GH III will have to fill that void. Which I'm sure it will. Plus a feb release means I won't have to worry about it interfering with my final exams.

Gaaaah. I can't stand this. The original wait was bad enough but now I've got to break it to my friends that they have to wait another 2 months. We were going to have a huge tournament. Joe Angry. JOE SMASH.

Pink button: Draw a mustache on everyone in the picture who doesn't already have one.

This is an outrage.

Come on! I just preordered this. Ooh I'm so mad.

While I am very mad about the delay, I think I can wait for 4 months. Plus, I agree with Master Foot. Because in my opinion, Master Chief just might make it to Brawl. He does match up to other gaming icons such as Mario and Sonic. Plus, I like Halo 2.

I learned that you have to break open the smash ball to utilize it, that makes me angrier than the delay.

Pink button= (Press for the REAL release date). Hmm looks like it still looks fuzzy. Maybe it's going to be even later than feb 10th?

Master chief won't be in the game, halo 1, 2 or 3 was never for Nintendo. Sonic was, and not many people cared if master chief's in or not. Well, not like sonic.

I have been waiting the whole fricken year for this game. I was looking forward to getting it for Christmas. Now I have to wait 3 EXTRA MONTHS (sobs in background). At least it comes out close to my birthday. Plus it will probably be a lot better with an extra three months (sniff sniff) of development. But still I am mad at Sakurai for getting our hopes up for nothing. I wonder if this has anything to do with sonic's appearance. After all, Sakurai did cover up the bad news with his appearance.

First of all, I agree with everyone who says the delay sucks, but I also have something to add: I think they should have delayed all the information that they've disclosed. Waiting months and months for a game doesn't build hype, it kills it. Also, they've released far too much information already. I remember going "OMG, it's____!" every time I unlocked a character in Melee. As for Brawl, I already know about all the cool characters. The only other thing they have left to surprise people with is maybe some other jerk who nobody even wants anyway (examples: Crash Bandicoot, Spyro The Dragon, Geno, Paper Mario, or a Moblin). However, despite all my bickering, I'll no doubt still be getting the game when it comes out.

Could be worse, they could stop working on the game altogether and never release it.

If you could play this game at E For All then wouldn't that mean it's done, and if it's done than why are they delaying it.

On the second pic, how does Yoshi do that?

Did you know that melee came out on december 3rd? That's why they put the brawl release date on december 3rd, then they realized that the game was overflowing with ideas, so they needed to delay it.

They probably delayed it so they could put in and perfect the stage builder and entrances.

Hey, maybe since they finally have a box art design down maybe they won't delay it any more.

Is one of those in the last picture supposed to be the Ice Climbers grabbing onto Charizard when he's gliding?

I saw on a shopko flyer and on the website Brawl's release is marked Dec 6th and I'm thinking "Zuuuuh?". What's that all about? Is it about pre-orders, or a demo, or something?