The Brawl Anyone mode in Super Smash Bros Brawl is discussed by Sakurai in today's update.

This is an online mode where you do battle with complete strangers. You connect through Nintendo Wi-Fi, choose Brawl Anyone, a character and a stage, then you're off. Be quick in choosing your character, because there's a 45 second timer, after which a random one will be assigned to you. Hidden characters will be available to fight with, so if you're really averse to spoilers stay out of this mode until you've unlocked them all.

The stage is also chosen randomly from those voted on by players, same with items being turned on or off.

Brawl Anyone is completely anonymous, you can't see each others names' or send any messages, it's all about the brawling. In the event that someone gets disconnected, a CPU will seamlessly take over their character, supposedly without you even noticing! 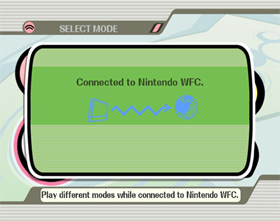 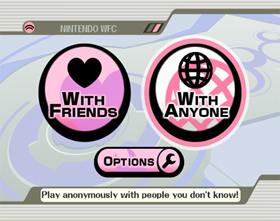 All my friends are dead. 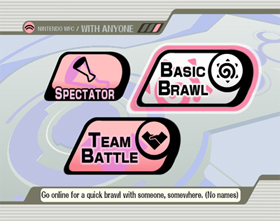 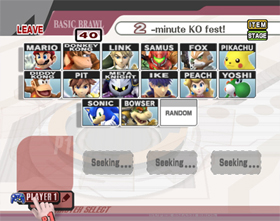 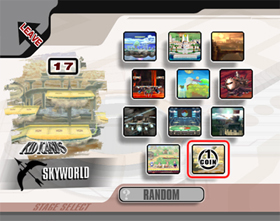 Pressure's on, I can't decide. 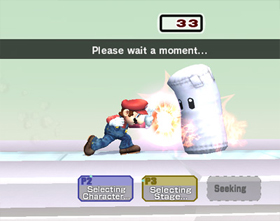 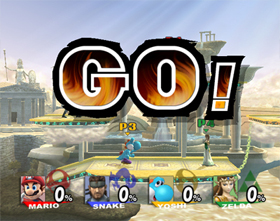 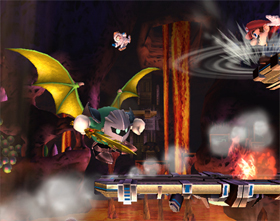 Why no caption on the last one?

This shows us the character selection screen.

This is one of the coolest updates yet in my opinion. I love what they've done with it. I'm going to get all the characters before going online though.

Well there's 14 non-secret characters this time, then. But that means that we have to unlock ice climbers?

What's with the miniature character selection screen? Is Sonic a hidden character, or ready to go from the start? What about the Pokemon Trainer, Wario, and what's-his-face from Earthbound? Is that even the real character selection screen, or just something Nintendo gave us to hold us over until we see the real thing? Why are there only ten stages to choose from there? Will we be able to keep track of wins and losses? Can I possibly fit any more questions into this tiny space?

Anyone else notice the thing in the air above Meta Knight? Anyone else think it looks like Captain Olimar!?

The CPU taking over when someone is disconnected is a super cool feature. There's nothing more annoying than everyone having to quit the game because one person lagged out.

Well this is kind of an okay update, but I'd rather know a few "non-secret" characters instead of being told we might be able to see a few in multiplayer mode.

This was the screen used in E-For all. It's a prototype screen. Seriously, they won't make you wait to play as Wario.

What? You can't vs the same people twice? This, I have to say is devastating. BTW: Light Blue Yoshi.

Anyone notice that little white dude in the background of the last pic? Looks like Olimar, and if you look at the Ice Climber pics, it looks like Link, but too small too be him. Young Link or Wind Waker Link, maybe? And as for the Ice climbers unlockability BrothaZ, they have never made a default character secret in game transition, so I'm guessing they won't start now. Probably just a rough draft selection screen, if you will.

In case no one knows that little thing in the picture with meta knight is nana (one of the ice climbers) getting knocked off the stage.

That is obviously the character select screen from the early build, it has to be! What's with all the fluffy pink colors?! Funny, I have the strange urge to pick posies.

Anybody notice the lack of Kirby in the character select screen.

The whole computer takes over is a beautiful idea. I don't know how many times I wanted to smash my face in when someone disconnected from Wifi and I lost whatever I was doing in the match against me. This way, at least I'll get to crush some computer, if my opponent wimps out.

What is this thing on top of metaknight at the last pic? It looks like a little bomberman.

No, I believe that's the character selection screen on the demo.

I embraceth this suggestion. Come hither brawl for I must taste such gameplay.

Well done Nintendo, very sneaky. Showing us the character selection screen without actually giving away all the characters. Nice one.

Zelda and Snake are missing as well.

This mode will rock. I rather not know anyone's name anyhow, funny as it seems.

It's the demo screen until the 15th, then we'll find out the REAL starter roster. After all Sakurai has one more character that is going to be used as a starter.

Ok. This is how it goes: A white Ice Climber is flying in the back of the last pic. It's not Olimar *sob*. And the character selection screen is not official. It's from E For All. Why Ice Climbers is not there in selection? Because it needs to point out that you could actually SEE hidden characters *pants*.

I'm still hoping to see Olimar. Final smash: the onion flies down and purple pikmin start coming out of it, attacking people as they walk offscreen.

Damn, thought it was Olimar, not an Ice Cimber.

Say, I'm totally fine with the selection screen in pink colors. It reminds me of Kirby Air Ride. Besides, what other "big games" would use pink? Halo? Brawl'll rock no matter what.

Is it just 2 minute battles, can you have lives also.

Erm I not got online yet and it's the only way to unlock mewtwo and goku.