Bridge of Eldin stage in SSBB

The Bridge of Eldin from The Legend of Zelda: Twilight Princess is to be a stage in Super Smash Bros Brawl according to today's official update.

It's a completely flat area, with appearances being made by King Bulblin and Lord Bullbo. They'll blast holes in the floor using bombs, which will then be repaired by a portal in the air. 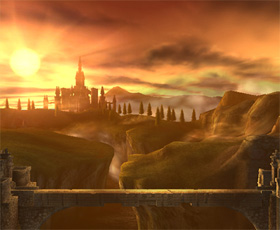 Nowhere to run, nowhere to hide. 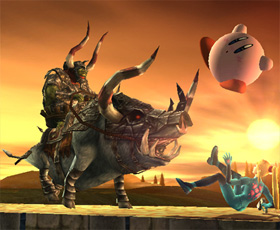 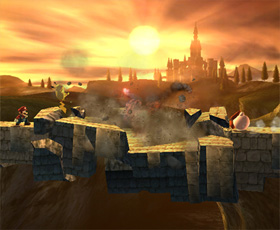 Eldin Bridge is falling down. 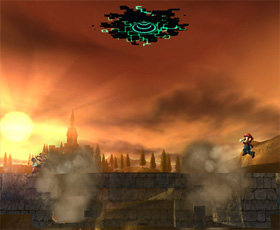 And as if by magic, the portal appeared.

That is so cool, is the pig an assist character or something?!

Those pics look photoshopped, but it's good to see a TP stage in Brawl. Most likely the sun will be moving in real time to create that highly touted night/day effect.

Man it's too bad that you can't go through the portal so you can end up somewhere else, like the Hyrule Castle or the temple in the middle of the desert.

This level is pretty cool. The fact that the field is blown up and repaired makes for an exciting match.

Is that all this stage is? A bridge blown apart now and then by an orc riding a demonic warthog? I sincerely hope not.

For me, this is the best stage for the moment.

Why is it completely flat?

That castle in the first two videos. What castle is that? It's not hyrule castle for sure.

How do you throw people off?

This is a great stage. Now if I could only figure out how to make the bridge reappear on twilight princess.

It would be hilarious if you knocked someone down the hole in the bridge the moment the piece of the bridge returned. It would suck getting stuck.

Ah, that's mad hot! If feels like you're playing LOZ again. I wonder if they let you go into Hyrule Field!

Pimp ass stage - I love it.

Sweet, it looks a LOT like it does in Twilight Princess.

Can you say "Midna"?

If this stage didnt have Bulblin and Bullbo, then I think it would suck. But it does have them, so it will be pretty cool.

Can you play as King Bulbin?

Those look like amazing graphics and I love the idea of the bridge of eldin as a stage. Can't wait for ssbb.

Paper mario should be a character, so then he could go 3-D then push everyone of the bridge. LOL!

I would like it if there wasn't that Bulbin guy running through.

AHH! AHHH! Oh, wait I'm not falling, this looks like a cool stage.

Wow that is cool.

Well, they don't have the black particles in the air.

They should have some lizalfos too.

You repair the bridge in TP by going to the desert and finding the bride piece on the hill. Then you warp to the bridge. Gonzo, the black particles are only there if the area is covered in Twilight. This is going to be fun. I love flat stages, especially when you have a character that has projectile attacks.

I like all these stages but I'm kind of concerned. Nintendo makes a big deal about day to night, or season to season but there should be a level with more terrain and places to run. I hope more stages like the temple come in.

Now we just need a huge level like temple to be confirmed, but the more the better. I really enjoy destroying my friends on huge levels. They should bring back Temple, and definitely Fountain of Dreams. It looked awesome, the music was excellent, and it was fun to play on, I hope it comes back! Fountain of Dreams for SSBB.

But what does the portal do? That is the question that haunts me.

The bridge piece falls out of the portal. And the round thing on the middle of the bridge on the 15 second clip was not Sonic. I hope he is in but that was the wrong colors. It was probably a bomb.

That fight with king bublin was hard but I managed to pass it. It will be funny to see him appear on stage.

BrothaZ that castle you see in the video is a part of fire emblem, if you noticed the black dragon flags.

Hawk, the pig is not an assist, just a part of this stage, and the portal repairs the bridge.