It's called End of Day, so named because in Pikmin on the GameCube, Olimar had to return to his ship before night time to avoid nasty wildlife (much like Robert Neville).

In Brawl, Olimar once again climbs aboard his ship and blasts off to safety. Fighters on the ground will be subjected to bulborbs and god knows what else. On reentry, the spaceship also causes an explosion which might do some damage. 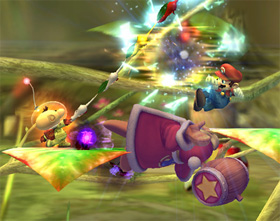 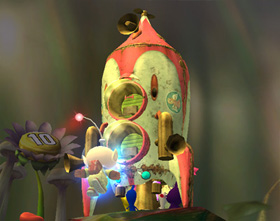 One and a half to beam up. 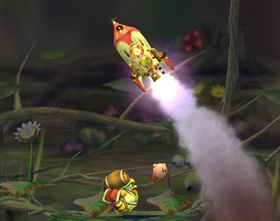 Ah I wouldn't have fit in there anyway. 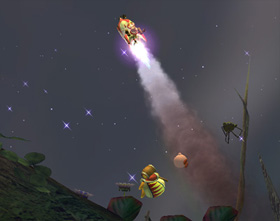 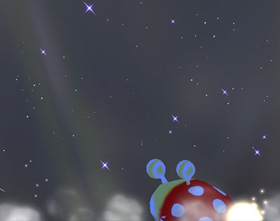 Space traveler, you broke my heart. 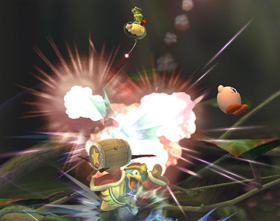 Cripes, I told you to fill her up.

Hey, it's the ship from Pikmin 2! I would have preferred the Dolphin but that ship is cool too since it can search for treasure and has two seats.

If you look closely at the last shot you can see that Olimar's eyes are wide open. I wonder if he does that every time he gets hit.

What's with King Dedede and the Steve Irwin jokes? Anyway, I like this Final Smash and I'll rule lots of people this way.

One of the Weirder final smashes.

Cool final smash. This would be helping when we need it to kill those very hard cp's in adventure mode.

That is one Cruel final smash. I Like IT.

I love this. It's original and incorporates something that fans of the game know.

Hah. I was hoping to see how his Final Smash turned out. I like this better than anything I could have come up with. Kudos, Nintendo.

Hey, everyone, check this out. The main page has all the characters' special moves and final smashes. There are two things I want to say: 1) Dedede's standard special move is also inhale, like kirby. Amazing. 2) Zero suit samus's final smash is super power suit or something like that. Maybe she'll get her suit back?

This final smash looks cool, but the fact that others can steal your KO's so easily makes me mad. And as cool as this and the inclusion of Sheik is, it still doesn't make up for the delay.

Maybe Nintendo should make special updates when you play Wi-Fi for brawl like maybe more characters and levels? It would be cool. Friend suggest it to me. Only downside if you don't have Wi-Fi.

This Final Smash is best to be avoided, by both the victims and the user. It's obvious why the victims should steer clear; the user should avoid using this move altogether to avoid KO thievery.

This is an unusual Final Smash. And it sounds very painful to any characters left on the ground after Olimar takes off.

Cool. Captain Olimar's Final smash is just like Robert Neville in "I AM LEGEND".

Samus does get her power suit back.

I don't get the part with the Bulborbs doesn't make sense, but I like it. Final shot is a lot like what happens at the beginning of Pikmin.

Captain Olimar has one of the best Final Smash along with Fox, Falco, and Wolf.