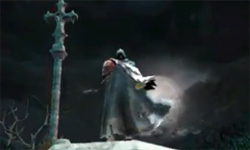 If your Halloween has been relatively scare-free, maybe this trailer from Konami will hit the spot. As well as having a frighteningly long name, Castlevania: Lords of Shadow, Mirror of Fate looks to have some great platforming and whippy combat in an adventure that's claimed to last 20 hours.

CLoSMoF (as I'm calling it from now on) will be released sometime next year.