CID the Dummy announced for Wii

In a press release earlier today, a new action platformer destined for Wii and DS was announced. CID the Dummy is under development by Twelve Interactive and will be published by Oxygen Games.

CID is a crash test dummy with a variety of fighting moves, including a head-butt that can break down walls. Apparently he can also climb, swing on ropes, burn things and bounce on springs. He's a real talent. 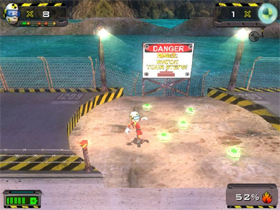 The gameplay is said to consist of fighting enemies, solving puzzles and using CID's acrobatics to escape dangerous scenarios.

You can expect to see CID on the shelves sometime during the second quarter of 2008.

I knew it! I knew that one day the Test Dummies will rise up and turn against us! But now being serious, this sounds interesting as you'll most likely get to blow and crash stuff up (including yourself).

Does this have anything to do with influencing kids to wear their seat belt like those weird cartoons?

I hope to god that this isn't a cheap cash-in platformer title. It looks it.

CID in brawl. Honestly, that sounds awesome because of his moves.

Uugh I thought this was some sort of CD-I revival *shudder*.

What!? When did test dummies need their own game?