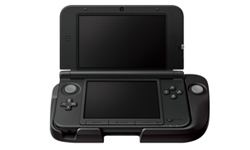 The official Nintendo of Japan website has revealed a new Circle Pad Pro peripheral - this one for the enlarged Nintendo 3DS XL. You can see it there, in the picture, adding even more girth to the already beefy handheld. The 3DS XL Circle Pad Pro has only been announced for the Japanese market so far, but we'd expect it to hit other regions sometime soon.

its alright i have giant palms.