Contra, the classic side-scrolling shooter series from Konami is to be revamped and released on WiiWare, under the name Contra Rebirth. In essence, it will be a follow-up to the SNES game "Contra 3: The Alien Wars".

The developers have done a great job keeping this one under wraps, as it comes out in Japan in just four days time, on May 12th 2009. Japanese gamers can expect to pay 1,000 Points for it. Some screens are shown below: 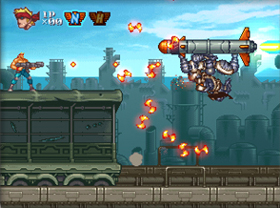 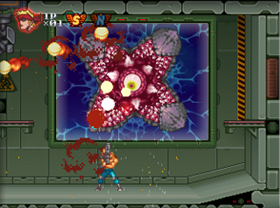 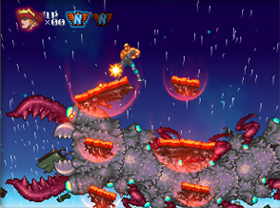 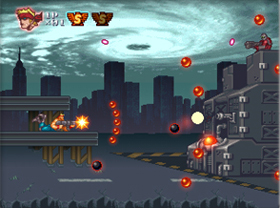 Woo-Hoo Contra rocks! I'll be getting this one.

Why can't konami put this on the Wii as a disc game?

Looks good to me.

On a game disk Konami has to pay for shipping costs, and the cost of going through a retail vendor. Offering the game online = more direct profit, and wider product availability. Everything is going digital these days. People used to go to the video store to rent movies. Then they used Netflix. Now they're downloading movies on demand. I wouldn't be super surprised at all if, a few console generations from now, all games are downloaded and the disk becomes an archaic memory, like the game cartridge. I'm not saying I want that, but I am saying that's what we're looking at.

Doesn't look bad at all.

Good for Konami, now all we need is TMNT Turtles in Time.

This game is awful, definitely not worth 1000 Wii pts, completely disappointed! Reg contra should be available.