Reports indicate that Death Jr 2: Root of Evil, a game previously limited to the PSP is now coming to Wii.

Developed by Backbone Entertainment, the Wii version will be upgraded in a number of ways according to the producer, James Stanley.

An early screenshot is available: 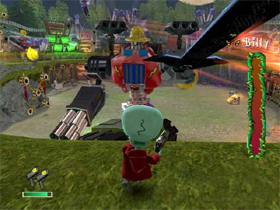 Personally I haven't heard of Death Jr before, hope it's a good'n.

I think I heard of Death Jr. Before but it's possible I might be mixing it up with another game.

I hope this is good, I'd hate another disappointment.

So now wii's getting psp ports too?

I am disappointed that they'd port a psp title. They should try to develop a title ground up for Wii. However, I love the Johnen Vasquez-y style (Invader Zim).