Another Pokemon shown on the official Smash Bros Brawl update today, it's Deoxys. Like others, he springs from a Pokeball when used by a player. 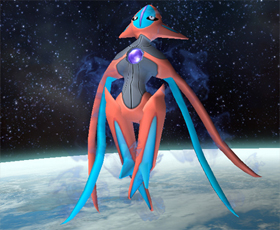 He won't fit in many pockets. 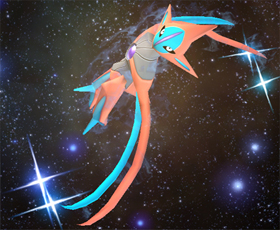 Space. It's big and it's clever. 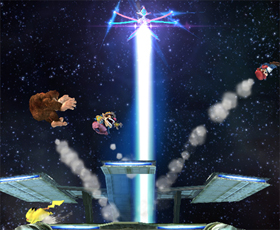 Many fans were hoping to see Deoxys replace Mewtwo as a playable character. Too bad for them. I wonder though, doesn't Deoxys have several forms? Will it shift into those forms?

I myself wanted an attack for each form, so that he summons one technique when you pick him.

Cool but I was hoping deoxys would be playble.

I heard a lot controversy was swarming around about Deoxys being a playable Brawl character. So, if that's true, a lot of Deoxys fans got let down, and that's funny. Made me laugh.

Pikachu knows a Hyperbeam when he sees one. By the way, those are some sweet looking effects around Deoxys! Sorry pokemaniacs, but Destiny Deoxys was cheesy.

Personally, I don't care which pokemon are in it. As long as they are in, it doesn't matter. I'm sure Sakurai will make the right choices. Don't get me wrong I've always been a huge fan of the games and at one point in my life I was a pokemaniac (haven't we all?). I just don't care which pokemon are in. I would rather hear about say... online play?

Wow. Not a very extravagant update, but it is something.

I was really hoping he would be a character, but oh well. I hope kyogre would be in a pokeball.

This confirm the false rumor of changing Mewtwo for Deoxys, or just the rumor that said you could play with him.

Why can't he be a character, not in a Pokeball? Does anyone know of other cool Pokemon that would make great characters, like Lucario? By the way, Deoxys looks awesome.

That's cool, I really want deoxys on brawl and you can tell that pikachu sent it out.

Awesome. Deoxys will have a part in a lot of strategies. Got to love hyper beam. Deoxys is my second second to favorite pokemon, my favorite being Grovyle. This time in Smash Bros, the drawings look perfect and the animation seems flawless. I can't wait to play this. Deoxys Rules (but not as much as Grovyle).

If my Smash logic is still all there, Deoxys could pop out of a Pokeball in any one of its four forms. That one there was its attack form, so it fired a Hyper Beam. Now for some speculation: if its speed form showed up, it could do a light-speed slash at the nearest player. If it was defense, it could provide the user a protective shield for a short time; I'm not too sure what the normal form would do. But still, no Deoxys as a playable character. Oh ho-hum. It may not sound like it, from my detailed logic-ish reasoning of Deoxys' four forms in Smash, but I'm not much of a Pokeperson. I'd rather play as Lucario anyway, it's the only one that really counts for me.

Blaziken is my personal pick for another playable pokemon. Sakurai's updates are getting quite boring now. There's nothing really NEW to sink your teeth into. Throw us a bone here! There aren't even any other possible 3rd party characters that MAY be in Brawl.

DragonFoxcoon, they showed his normal form. The form you thought was his speed form is his attack form.

I think Bidoof would totally own all other pokeball pokemon.

I hope lucario gets in the pokeball too, no more playable pokemon. Unless they can pull off combos and impress non-poke people.

Why can't he be a locked player or boss?

Now this is sort of OT but I want to say it. I use to be a Pokemon back in the day. And my favorite Pokemon of all time was Charizard. He still is. I highly doubt he'll be playable, but I know he'll be in a Pokeball.

Oh my god, Master Foot. You like Blaziken too? He's my FAVORITE pokemon, he would make a awesome playable character, but I know that it would be impossible.

Personally the only Pokemon character I want to be playable is Pikachu (maybe Lucario or Mewtwo) but that is it, nothing else. I mean I rather have all the Pokemon in Pokeballs (except for Pika).

That's mad hot! He's one of the best Pokemon. What about Jirachi?

THIS is his attack form. "I think Bidoof would totally own all other pokeball pokemon". Amen, that or Magikarp.

People actually thought that deoxys was playable. They thought the down be move would change forms.

And you can use groudon, how sweet is that, sweeter than deoxys.

I think it's cool that you get deoxys because of that hyper beam.

I kind of want luxray as a playable. He's one of the best on pearl/diamond, and he's easy to evolve. I think it would be cool to have a cat like creature that pwns. Pikachu is a wuss.

Pikachu is not a wuss! Anyway has anyone considered the regis (Regirock, Registeel, Regice, Regigigas)?

They need to add Lucario! Bun the regis lol.

How can you personally choose deoxys to replace mewtwo, hello? Mewtwo is the strongest Pokemon ever.

It just stays in this form.

I think all of the legendary pokemon ROCK.