The devil's come for a brawl

Ever played the NES game called Devil World? Me either, but that's where this guy comes from. Today's update says the Devil is a new assisting character in Super Smash Bros Brawl.

Despite being released in Japan and Europe, the game never made it to the US due to strict policies on religious icons being used in games (sounds a bit spastic? tee hee).

This devil likes to point a lot, and when he does he means business so you'd better be on your toes. The screen will scroll in the direction he points. 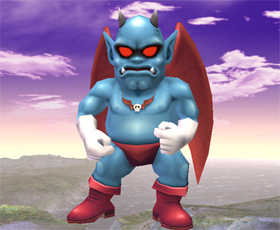 Hell has the best gyms. 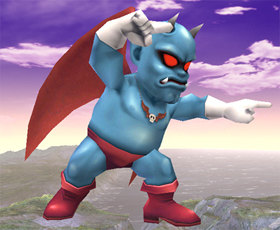 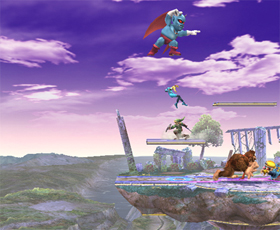 This isn't my idea of assisting. 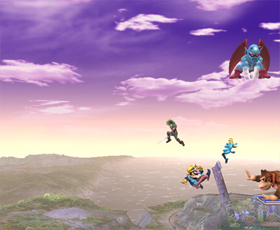 He only does it for attention.

Wow that sucks for us. I mean there's like no space on the stage.

Hey this guy is not bad for an assist trophy.

Is it just me or is DK waving Bye-Bye to the other players?

He also controlled how the screen would scroll in Devil World for the Famicom. The sides would crush you if you were stuck in the maze as it scrolled off the screen. I own it and find it to be a very difficult and gimmicky Pacman knock-off. It's not worth hunting down if you have to pay over $5 for it. But it is neat to see him rendered in something other than an 8-bit sprite. If they chose to put him in this game, can the little guys from Balloon Fight be far behind? I'll cross my fingers to that one.

This guy's a lunatic. Peh, some assist character.

This is sure to ruffle the feathers of religious soccer moms. Nintendo is known for being secular and family friendly. Chances are that they will rename that character. If that's the case then the entire Bible game should be censored. Atheists can argue that it violates their beliefs and lobby for the game being banned. Honestly, if you're really going to be offended by themes like that, then don't patronize it, end of story.

Wow that's weird he's not even assisting. On the bottom picture it looks like donkey kong is waving goodbye.

That ought to be fun. Again, my nit about the computer players comes into play here; they'll probably not even flinch and continue to pound the human players while off-screen. Whatever. Using this little devil against other human players is good for a few laughs.

Not an ASSIST trophy but it's a trophy.

Oh my god I can see me getting pissed off at this thing, and then laughing with everybody about how we all died at once.

In the situation in the bottom picture, got to love to be DK. Pit, and Yoshi would work good too. Pit with his temporary wings, Yoshi with his long jump. I'm not sure how good Meta Knight would fly though.

Do I see room for glitches?

What about Dr Lobe from Big Brain Academy as an assist trophy? He could stand in the stage lecturing, trying to distract us. Boy that would be annoying.

HA best assist trophy yet. Which will be more annoying and funny: Devil or a Nintendog? HA.

I wish assist characters could get hurt. I'd be Pit and kill him, God vs Satan style! Oh yeah.

This is kind of retarded, how is he assisting anyway? Plus he's just dancing, a dancing fool.

It says "This Devil", not "THE Devil". Besides, it's their imagination. You can't count on it being true. Sure it might have the name "Devil", but that doesn't mean the game will be banned. It's just too good to pass up.

Seems about as useful as Togepi making the whole screen black, I still can't get over how annoying that was.

Well at least it kills your enemies in an evil way, but he still sucks for assisting.

He has some spastic powers.

If CF is in, then I'll have the advantage whenever this guy comes up. Falcon Dive FTW.

DK is the one who got the assisting char. If you look closely he is on like a shiny platform. Just a guess.

The comment about the first picture was freakin funny.

That would be annyoying, but not as annoying as togepi causing an eclipse.

I'm going to hate him.