Diddy Kong, newcomer to Super Smash Bros Brawl has an array of moves at his disposal as shown in today's update.

Firstly he has his Peanut Popgun, which fires peanuts. The power of the shot can be increased by holding down the fire button, but hold it too long and you'll get a backfire (giving you a bad time). If the shell breaks apart, a peanut will pop out which you can eat to recover some damage. 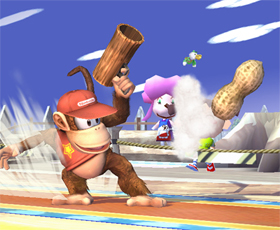 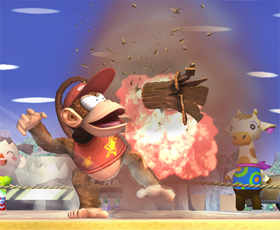 That's what you get for cutting down trees. 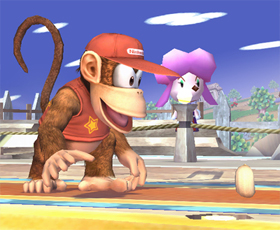 Stop, it's been on the floor.

Another move he has is the Rocketbarrel Boost, this can also be charged up. Holding left or right before you fire it, you can change the trajectory of your jump. 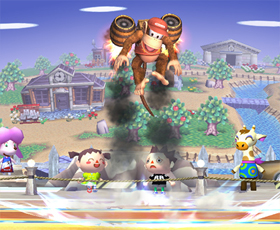 That thing needs a new exhaust. 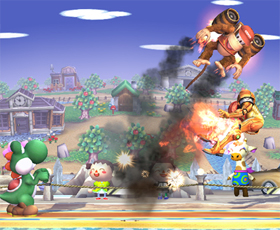 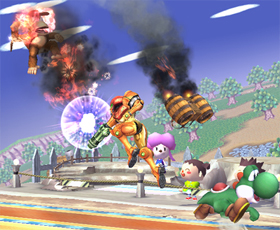 Did anyone see Pete the postman flying in the first pic? Anyway sweet update.

Looks like Diddy's going to be one of those "advanced" fighters. Can't really tell just from these though.

In the first pic of the rocket barrel, the animal crossing character is upset by the exhaust.

Finally Diddy's got some moves. The perfect way for a little monkey to fight.

No wonder Diddy Kong joined the game, he polluted the whole the jungle with his rocketpack (at least he saved a log though).

Once again, this brings back happy memories of DK 64. I couldn't be happier with the move set. Maybe he'll whip out his guitar for his Final Smash.

Even before he confirmed for Brawl I knew he was going to have these moves. I reckon his dash attack (you run and press A while running) will be his cartwheel like in DK64.

Look at yoshi and his doom in the last picture! I doubt there will be clones in Brawl. That's good. I kind of hope Falco gets a new move set too in the next Smash Bros, because too many people were good and cheap with him in Melee.

I liked the second to last caption.

I've been waiting for them to announce this. We all saw it coming. Go Rocketbarrel Boost.

This is so much better than dk final smash.

Cool moves. I'll play as diddy when I get this game *cocks peanut shotgun*.

For a bad character he has a really bad Ult compared to the other. All can be easily dodged.

Ya know, there's one more spot in the veteran fighters place. That's going to be Luigi. Ya know why? Every game with Mario in it needs a Luigi. Unless something like Mario sunshine.

Hang on! He's only using one!?

I love all of the moves these characters have.

Keep it up, Sakurai. No complaints here, just pure awe.

Erm brothaZ don't forget they will be taking characters out, and they're mostly removing clones from the last game.