As he scrambles around the arena he has things like the Rocketbarrel Boost and a Peanut Pop Gun at his disposal. 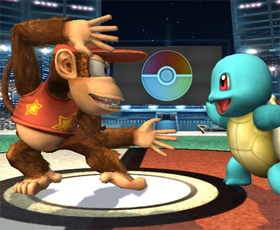 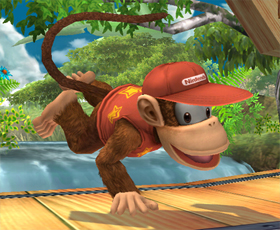 Diddy didn't do it. 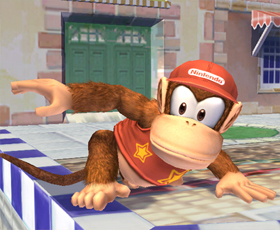 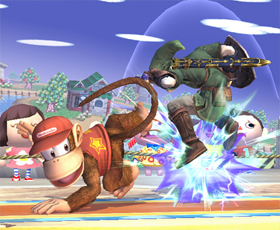 Link tried to ride him again.

What ever happened to DONKEY KONG JR?! Does anybody know why they never use him for any games anymore?

We all saw it coming.

I like the fact that he will be the most opposite of his partner DK. To me he's a cool addition, but I don't really like Donkey Kong period.

I knew diddy kong was going to be in brawl.

It's about time they showed diddy. Most of us really wanted diddy and now he has come for brawl. I wish they just showed returning characters because I want the new ones to be secret, but that's just my opinion.

YES! I knew Diddy would be in it. I just knew it!

I love diddy kong. Ssbb is going to be so cool.

I knew he would be included.

Diddy kong! Glad to see him, especially after how much I like diddy kong racing.

Diddy! I am so happy.

Oh, nostalgia! This brings back memories from Donkey Kong 64. That was a fantastic game.

I can't tell yet if he's going to be a good character or a DK 2 (Donkey Kong is one of the worst characters in Melee).

That last caption was NICE. We know Diddy isn't a clone since he, uh, has a jetpack and guns, so that's pretty cool.

Diddy Kong is an awesome little monkey who looks cool. I bet that his final smash will be his electric guitar waves sending people flying just like in Donkey Kong 64. Tiny Kong should be in the game because she could smack people silly with her ponytail hairstyle and also with backflip kicks. Her Up-B special move could be a ponytail twirl.

Woohooo diddy king is in the house.

Diddy King just makes me think of Diddy Kong Racing. Now there was a fun game! "Rocket Barrel Boost" and a "Peanut Pop Gun"? Would've preferred they stuck to natural punching/spinning/kicking moves like they did with Donkey Kong.

Monkeys and turtles were bred to fight one another.

Awesome! Best week of updates so far! Did anyone else notice Diddy's sporting a Nintendo hat?

Well, I'm not that surprised.

Not Diddy. He's like Luigi, only people hate him. Well, on the bright side, this will be a great opportunity to inflict pain on him.

I always knew Diddy would be a perfect candidate for Smash. As long as Link keeps his paws off, I'm willing to try Diddy, see how he moves, how flexible he is, how much pop he has in his gun.

I have a hunch about what his final smash is going to be.

One of the best charaters updates of all.

I'm glad they have diddy in the game now, but they should seriously consider Geno from mario rpg or someone from castlevania.

That's another character. There are almost like 20 characters now. That's a full roster.

Everybody wanted Diddy in Melee, but somehow didn't get in. I'm so excited for Brawl, now that he's in it. Who's excited for the Peanut Pop Gun?

I love the small fast characters, my favorite.

DIDDY KONG! My favourite DK character since DKC1. I knew if he was in the game he'd use his peanut popguns and jetbarrel.

Diddy Kong will be my best character.

I, for one hope that he uses his retro cartwheel as one of his moves (I'm not sure how it would work but a man can dream, right?).

Cool he was my chimp of choice in dk 64.

I'm so happy diddy is finally in. I was hoping he would be in smash bros melee, but if ganondorf, dr mario, and mr game and watch don't return I will be really upset. They probably aren't showing them on the website because you have to unlock them. They should make a donkey kong 64 #2 because donkey kong 64 was the best game of all time.

Cool they need Genaral Guy though.

This was an awesome update. I love Diddy Kong. I hope Dixey makes it in.