For this move the boosters and popguns go into overdrive, as Diddy flies around the stage causing explosions all over while rapid firing peanuts.

When the time runs out his rocket barrels will explode. Also peanuts that missed their target will be lying around on the floor for anyone to consume and regain some health. 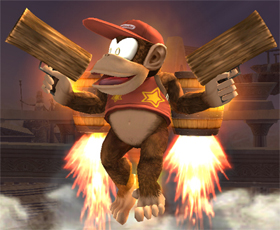 Sometimes monkeys can fly out your butt. 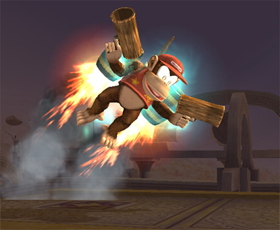 My feet are burning. 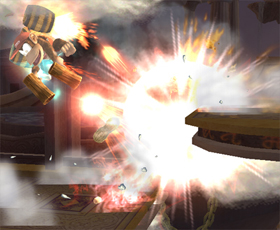 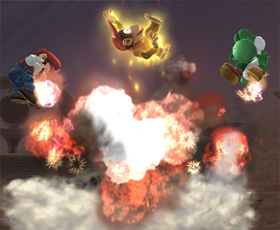 All good things come to an end. 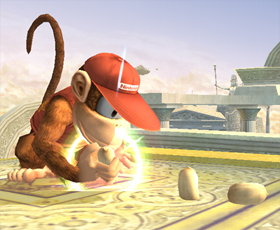 No one touch my nuts please.

I wish they would make Diddy's smash a little more.. spectacular? A mix of two special moves isn't really much to look at.

Not interested in this one, they're the same moves just together.

The last pic is funny.

I thought he'd throw bananas everywhere, but at least there was a final smash update.

Can't really judge any of the smashes yet. Screenshots really can't show how effective it is in the game. It may not look as good as the other smashes, but it may still be very effective.

It's just like how he does it in Donkey Kong 64, only a little different. Well at least this is better then a stupid item or Pokemon update.

That's kind of lame. If you are skilled enough to evade the flying nuts, then you can take them. Diddy just lost some rep.

Aside from the unimaginative final move, I'm still interested in using him.

Well it's not like Diddy's interesting in the first place. I can't wait to use him as a punching bag!

It ain't that great but it is pretty looking.

Seems pretty cool, but I'm beginning to wonder if the explosion caused by the rocket barrels will hurt Diddy Kong too. That's going to be the ultimate gay if it does, you shouldn't get added damage just because you performed a final smash.

Yea not so great. They really should have given him the electric guitar.

I don't like that too much, but I'm still super excited for Brawl. But that final smash attack is kind of unimaginative (just be and up be combined). I wasn't too excited about Diddy anyway.

That last caption is funny.

Yeah, this one wasn't too creative. So much for the guitar thing I was looking forward to. Guess you can't win 'em all.

Uh disagree, his rockets who were hard to control at first are now more like a jetpack, think James Bond as a monkey wielding wooden guns. That third pic just looks simply badass!

No pichu fan, they are the same moves but you can see that they have more power to them. And the peanuts that do hit looks like they blow up and do fire damage. I hope they add different effects to fire, lightning, ice and dark damage. I don't think they really did much in melee but look cool. And I think they may have added water.

Halo 3 came out today. They should've put a bigger update than this. Oh well, go Diddy.

I love it, it's coo! Now all they need is to reveal Meta Knights smash, Snake's smash, introduce a new stage or character and I'm a happy camper.