Types of attack in SSBB

Several types of attack are available in Smash Bros Brawl, as you'd expect. Today Sakurai gives us the lowdown on these attacks and their controls.

The following is the standard attack, achieved by just tapping the attack button on its own without direction. It's fast, but likely not very powerful. 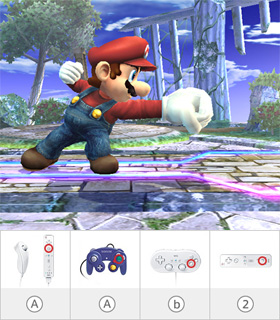 Next we have a strong attack. This is done by tilting the stick normally in a direction and hitting attack. These types of attack have a longer range and are more powerful. 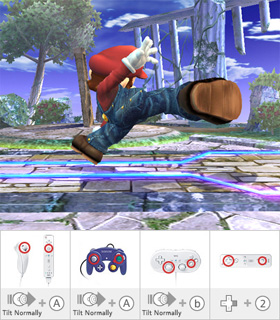 Last up are the smash attacks. These badboys are done by tapping the stick quickly and hitting the attack button. Or if you're using the Wiimote on its side, you hold down both 1 and 2. These are the most powerful attacks, and can be charged up the longer you hold down the button. 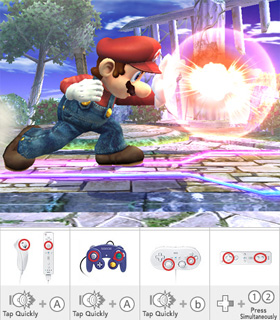 I didnt need to know this. But, ok, with the other news.

Hate to spoil it, but this is all covered in the 'How to play' video in Melee.

Wow! Mario does them much better then in Melee. I'm impressed.

I've been wanting to know how to use the Wii Remote tilted alone for a while now. I'm finally getting something.

Well right now I don't think the wiimote sideways will be one of my favorites to play with.

Sweet! I already knew they would include different kinds of attacks but now I know the controls. The smash attack on the Wii remote alone was a surprise though. Now we don't have to worry about awkward controls.

The one with the wii-mote looks kind of confusing.

That looks really easy but it just looks like a ssbm combo made by mario.

Yea, these moves are going to be easy, but the game will still be fun.

The single Wiimote setup is going to suck. I'm going to use the VC controller.

Wiimote and nunchuck are better because you can aim weapons.

Good thing we get to use the GC controller.