Take-Two Interactive and 2K Sports have announced that a new boxing game will be swinging its way onto the Wii.

Don King Presents: Prizefighter sees you taking control of a rookie fighter, training his way into a fighting career and eventually having a shot at the belt. This will all be told through a narrative done in the style of a sports documentary.

According to 2K's president Christoph Hartmann, the game will feature realistic graphics and is expected to surpass all expectations. 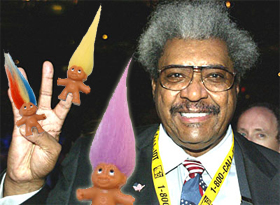 This could be a cash-in pile of poo or a masterpiece. Pull finger out developers, this could be great.

Hopefully it will be better than Wii Sports boxing. Of course, that was free, so I'm not complaining.

I think it will feature better graphics than any other boxing game on Wii and plus it will support Wii Balance Board for trainings before the fight.