For his most lethal move, DK whips out the bongos and plays a tune, much like in Donkey Konga. Pressing buttons in time to the rhythm increases the destruction. 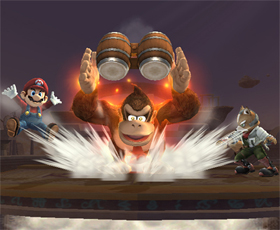 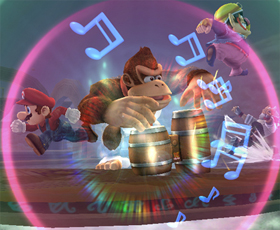 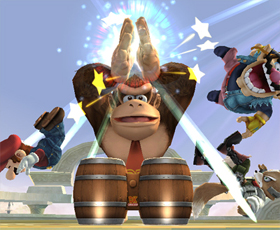 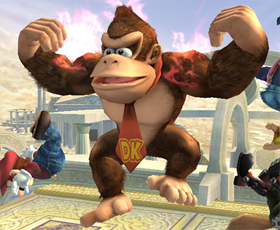 Ready to climb the corporate ladder.

I just knew it was going to be involved with bongos. Bring back the old non-musical DK.

Super smash bros will never be the same again.

Hey is diddy kong going to be in this game?

Does the character performing the final smash become invincible for that time period?

Man, that made me so mad when there was an hour delay for DK's final smash. He's such a horrible character, and this final smash is even more proof of that. I guess I shouldn't be complaining too much, at least Sakurai even gave an update. He could have by all rights just been an ass and not given an update, but then he'd be brutally murdered. I guess he has no choice but to update on-time, so I'm having second thoughts about not complaining.

Even in dk64 he played bongos, the only non-musical dk is when he kidnapped princesses. Anyway cool final smash! Even cooler, I reserved brawl yesterday.

I was expecting this. I mean all of DK's recent games have been involving bongos, so what else is he going to do - turn into KING KONG. Yea I don't think so.

I thought his Final Smash would be something involving barrels, but this is good too.

Well it's kind of cool - the button thing, but, it's the worst final smash. I think my favorite right now is Samus, Mario or Link.

If ANYONE messes up my jungle beat, I'll annihilate you.

Wait, how would you know it was late. On the east coast, the update isn't until 3:AM, since it has to be 12:AM for the west coast. I highly doubt someone would stay up late just to read the update. Where exactly is this site set up?

Can anyone tell me how this Final smash works, because I'm confused. Does it do damage or just entertain you? PacMan for Brawl.

It would be nice if banjo and kazooie were in this, but seeing as those characters are owned by rare. Anyways great update! Waluigi beter be in this game.

I think that super monkey ball will be a character in ssbb.

Donkey kong is going to beat the drums kickass style.

I thought it would be a banana bomb, like those of worms world party.

I can imagine Dk's drums working like jiggleypuff's singing thing. Except he plays them too hard so he will probably wake them up.

I could bet $60 that Donkey Kong would not get on American Idol for that.

I think this Final Smash is some sort of a preperation that will make Donkey Kong stronger somehow, if you look at the last picture I mean.

Yea but wouldn't it be even cooler if he started riding ramby or used his coconut gun instead?

Toad, I agree with you, I think he gets stronger too.

I'll have to try out his final smash before I can say if it is good or not, but who knows, maybe it racks up damage really fast.

I have brawl and this smash sucks. DK is a really good character, but his final smash is worthless. It does practically no damage and they can easily escape it. Even Jigglypuff's final smash is better than DK's.

Actually DK's final smash is awesome, you just got to know know to control his drums. The secret is that then you start playing the drum every time you see a blue flash behind him you press A and that's it. If you do it right everybody dies because his attack range gets HUGE.