A new assisting character in Super Smash Bros Brawl has been revealed today by Sakurai. He's Dr Wright! No, it's not the guy from Trauma Center. It's not Phoenix Wright either. He's from... Sim City on the SNES.

I've not played it, so he's new to me. But he can pull up skyscrapers from nowhere, bam! 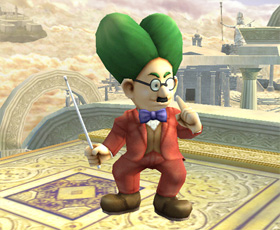 I forgot to dye the mustache green. 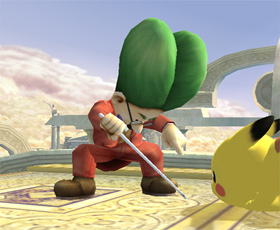 It's not what you're thinking. 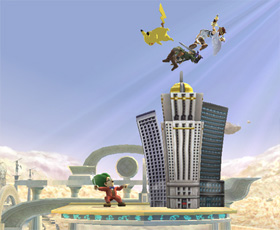 Wow I think I'll obey my teachers from now on.

Alright, enough of assisting characters. Where are the real new characters?

I've always loved destroying the cities I've built; I guess this is their way of getting revenge.

This game is going to be an awesome blast. So much randomness.

Woah. Can't wait to use him and see my brother go "WHAT THE HELL!".

I have only seen him as a trophy in SSBM.

Is he playable? I'm lost. What's an assisting character?

What are up with all these assist trophies? Just make the characters playable all the time!

Cool! This guy could be pretty useful when your enemies are crowding around you.

He's an assist character right? Because if so well.. does the building attack damage everyone? Because I only see 3 people in and they're all getting damaged.

Oh sweet! I was wondering where the hell that guy was from until you mentioned Sim City and then I was like "OHHH!". This is going to rule.

Does it do damage or just knock em flying in the air? And how long would it take I wonder.

No they showed 2 pokemon, a old one (goldeen), and a new one (groudon). Assist trophies are just pokeballs which summon cool Nintendo characters. Is DK bigger than Bowser?

1 person uses the assist on the others like a poke ball.

His hair is creepy. Nevertheless, his building attack is just too cool. Nice one including Sim City, they really wanted a huge amount of characters and games in this brawl edition.

This game looks like it's going to rock with so many characters appearing. Oh and the comments are freakin funny here.

At least my teachers are more sophisticated.

This guy has some freaky hair.

Eric, assist trophies are just like the pokeballs, except they release Nintendo characters instead of pokemon, you don't know what the trophy will be until you open the trophy.