There are also some art stills, some of which I think I recognize, some not. 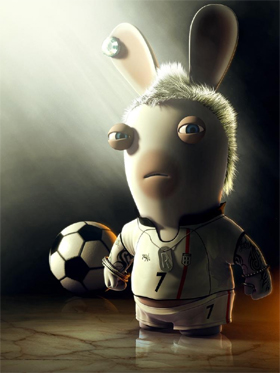 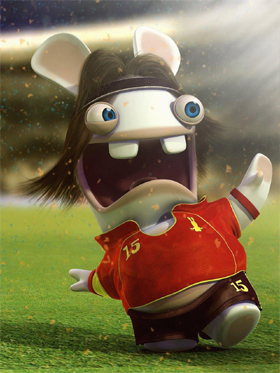 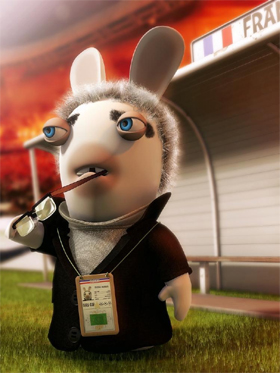 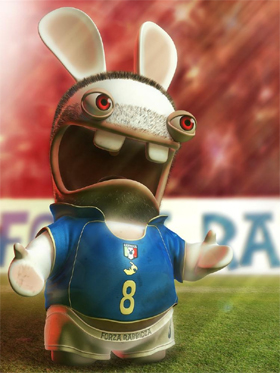 Don't think Rooney would be in a France shirt dude.

1st is Schweinsteiger (Ger). 2nd not sure, but either Spain or Portugal. 3rd is coach Domenech (Fr). 4th Ribery (Fr).

The second rabbid is Sergio Ramos for Spain. The fourth rabbid is Genaro Gattuso for Italy.

That's awesome! They should put Rabbids in more icons.

First of all Ronaldo doesn't play for Spain. Second that's not a France jersey, it's an Italy jersey. Learn soccer (real football). The second one is Sergio Ramos and the fourth is Ivan Gattuso.

That's an Italy shirt and is Gennaro Gattuso. The second one isn't Ronaldo, I don't even think it's a portugal player. I think it's Spain and Sergio Ramos.

Isn't that last guy the one that got headbutted by zidane last time?

Nope, the first one is David Beckham, second is a Spain dude, I think he is Torres, not sure. The other one is France's coach, and last one is maybe Luca Toni, but it's from Italy.

The 2nd one is Sergio Ramos of Spain and the 4th is Gennaro Gatusso of Italy.

Actually it's an italy shirt and 2nd is a spain shirt.

The second and fourth are Sergio Ramos and Genaro Gattuso- you can tell by the shirt numbers.

How much you guys want to bet "posting has been closed for this topic" is coming up pretty quick? Lawl, I have no idea who anyone here is, and I don't think it's worth crapping over.

Aw! A rabbids spinoff, hope they make a Rayman platformer again, the first looks perfect with GBA, the 2nd Was a 64 classic, the 3rd is diamond in the rough for cube, so a 4th would be perfect.