The stage is an enemy castle based on the Fire Emblem world, but not taken from any particular game in the series. It's also under heavy attack, so best watch your back. 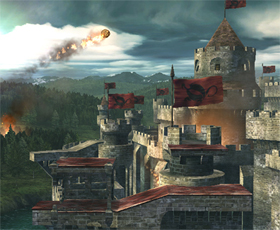 Time to get medieval up in here. 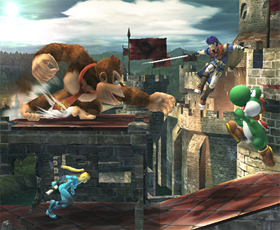 Dinos and monkeys and people, oh my. 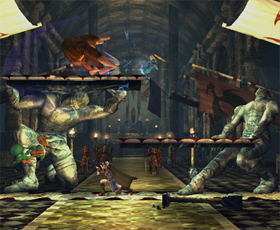 These things don't look safe to me. 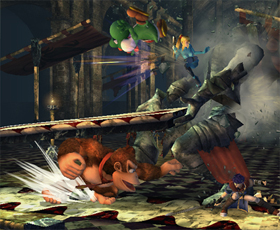 It's all fun and games until you get the bill. 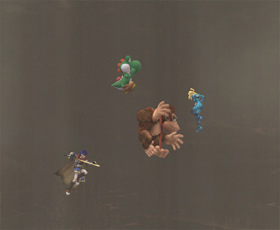 Aw man, I thought the Castle was the Mushroom Kingdom.

This is one of my favorite stages until now! It's very detailed and creaking things, passing from outside to inside to underground looks very fun. Oh and LOL to comment number 4.

That's an awesome level! They should bring it in the Fire Emblem games.

Man, this week's been a pretty great update week so far, not including DK's final smash. I hope tomorrow's update continues this trend. God, I can't wait for Brawl.

I'm going to love playing on this level.

So far, from what I see, this stage is just like the rest we've seen so far: too small and destined to change over time. But, since they've chosen to keep the Underground hidden, I'm guessing that's the main draw for this area. Was that "Challenger Approaches" sign at the Dojo yesterday?

If this stage is from Fire Emblem, then which one of the Fire Emblem games had this castle?

Finally, a different kind of level is confirmed.

If you would actually read on the website you'd notice that it wasn't in any, but they put it because the enemy boss is always in a castle and most of the story lines happen in a castle.

No that's Ike. This stage looks COOL, I'm happy they have stages like the Donkey Kong one, unusual ones that aren't just a stage and 3 platforms. I can't wait for info on the underground.

The underground's secret location could be where a final boss was fought such as FE6 the dark dragon/Idoun, FE7 dragon, FE8 Demon King/Fomortiis. I'm not including FE9 Path of Radiance because the final boss was an insane human and he was fought in a courtyard (although I'm almost willing to bet the final boss of FE10 will be the dark god imprisoned in the fire emblem).

Marth and roy will still be in this game right.

Will that big fall ever end or do you have to fight in air and only get killed by the sides?

It just hit me that the underground could be something to do with Ashnard (and the Begnion general from the looks of the game trailer for Goddess of Dawn) seeming to go mad even before they touched the Lehran's medallion.