Recently some serious bugs in Forever Blue were discovered. Quick to act, Nintendo has recalled the game in Japan. Users affected need to get in touch with Nintendo instead of returning it to the store.

A fixed version is already on the shelves, with a slightly different cover. The new one has a transparent blue band across the bottom. It doesn't look as nice, but that's the price of progress. 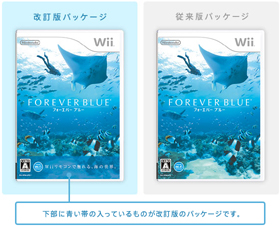 Good news for those of us outside Japan, since the upcoming release (under the title of Endless Ocean) will be without the bugs.

Why did they make it so subtle? They could have put "We fixed some bugs, buy this one" instead of just making the ocean bottom blue. Whatever, I suppose that is pretty good news. Not ground-breaking good news, but positive news nonetheless.

Nothing to do with this but I just want to say what a good website this is.

Subtle is always good. I think that they're trying to keep it out of the news.

Nintendo always watching out for you.

Aaah, so now it is called Endless Ocean. I wonder what the bug was in the game, oh well, problem solved anyway. Nintendo is always watching out for everyone.

Come on Nintendo! The Nintendo Seal of quality still means something.

Scooby, it has some japanese text. I think it would say something like 'i aint busted no more'.

Good ol' Big N. I was looking forward to giving this game a try. It's a good thing the bugs were fixed in Japan, so the US release will seem spotless.

Please just come out in the US already Endless Ocean! Plus, I like my games DE-Bugged, thank you.

The Japanese always get the bugs and fix it for North American release.