Goichi Suda (Suda51), the head of Grasshopper Studios spoke at a special event recently in Japan to help promote No More Heroes. He revealed that he would eventually like to do a trilogy based around the game's main character Travis Touchdown.

Despite not setting the sales charts alight in Japan (debuting at #40), No More Heroes is at least selling better than its forerunner Killer7 so far.

Famitsu magazine has seen fit to include it on their cover this week: 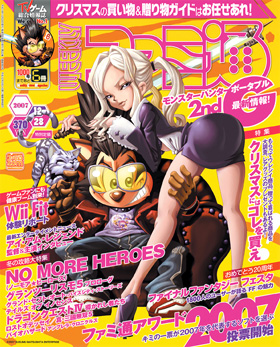 No More Heroes will reach the US and Europe in February.

If it would be of any concern, I really really want to play this game, and I have friends that want to play as much, but we are here in the US. Hook us up already. I'll give no more heroes toilet paper to all my relatives for Christmas.

Umm what the hell is that picture? XD.

I see babies coming from her. RAT BABIES! (And to let you know, No More Heroes started at 13k first week). Not surprising considering the disappointing seller that was Killer 7, even on the ps2.

My name is travis. I'd like to be that travis.

KICK ASS. I'm so for a new trilogy for the Wii. Mo-ehhhhh. It's still a shame that No More Heroes isn't selling well. Why do the Japanese have to suck so much in their gaming choices. I bet any Japanese gamer would rather play that dumb Dynasty Warriors / Gundam hybrid for 10 hours than play a masterpiece like Mario Galaxy for 30 minutes. Maybe people aren't buying NMH because it's censored. Gasp.

This will be a future classic on the Wii.