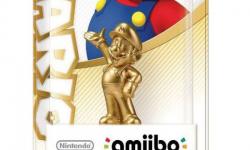 Get ready to shell out your coins

amiibo fans won't be happy to hear it, but the upcoming Gold Mario amiibo has been confirmed as another retailer exclusive. It joins Meta Knight as an amiibo that is only available at Wal-Mart stores. The gold Mario is the first amiibo of the new Super Mario Bros. line to be a retailer exclusive, while three amiibo from the Super Smash Bros. line, Rosalina & Luma, Meta Knight, and Shulk, were exclusive at Target, Wal-Mart, and GameStop.

During Nintendo's recent quarterly earnings call, it was revealed that amiibo has been a huge success. Unfortunately, the success of amiibo is not without its share of controversy. Many of the characters have been available in such limited numbers that many have been difficult to find for those who don't pre-order or pay astronomical prices for second hand figurines.

Are you excited to get this golden Mario? How do you feel about the amiibo line, or have you avoided it because of the limited availability of many of the characters? Let us know in the comments below.