There's another character from the Metal Gear series set to appear in Super Smash Bros Brawl. This one's an assist trophy though.

His name is Frank Jaeger, known as the Gray Fox. He looks freaky deaky, but he might just have a heart of gold. Stealth is his thing, he attacks in a slashing manner and is able to reflect projectiles. 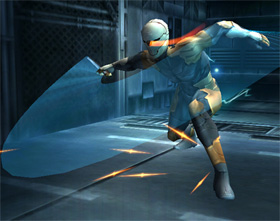 For the last time, I wasn't in X-Men ok? 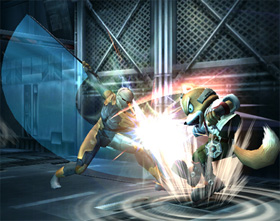 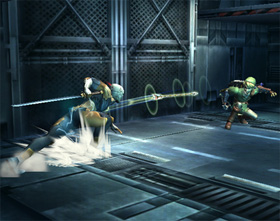 Bullets slide off me. 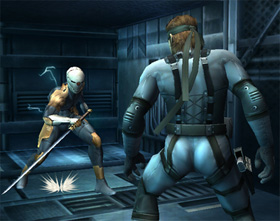 One view of Snake we don't need.

So how much do you want to bet that along with Assist Trophies 3rd Party Characters will also get a few items? Also is Snake is getting an Assist Trophy (and possibly items), then Sonic is. I say they'll be limited to one Assist Trophy so I think Sonic's Assist Trophy will be Tails because Tails has appeared in every Sonic Game along with Sonic and is Sonic's best friend.

Wait a second, wasn't today a double update? Yay, it was, you forgot the info on grabbing and throwing your opponent. There is a few funny captions you can probably come up with for the Ike Vs Link captions which teaches you how to grab and throw.

That means Sonic characters can and will appear as assist trophies (most likely Eggman and Knuckles).

The last pic was funny.

You're right, that last pic is completely disturbing. O. O.

Wow! Brawl is making all my dreams come true.

Lolz to the last caption.

Snake's butt is hanging out.

I never played any Metal Gear Solid games but he looks cool. All the captions & the goomba thing are funny today.

The dojo wording was strange. They made it sound like he's almost playable or controllable in some way. I hope so.

How many characters is that now? Regular fighters and assist trophies?

I've never heard of gray fox, but some of those captions made me laugh out loud, especially the last one.

Snake got a built body.

That means Tails could be an assist trophy? Wow, Snake even has a ripped ass. Nice XD.