Seemingly on a roll, High Voltage Software has announced another title aimed at core gamers on Wii to be shown off at this year's E3 Expo.

The Grinder is a horror FPS featuring a team of mercenary hunters, paid to seek out and kill swarms of monsters. The members of the team are Hector, AJ, Doc and Miko. 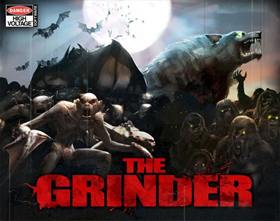 HVS are keen to make The Grinder action-packed, reports suggest that up to 65 enemies can currently be active at the same time. The likes of these include:

The weapons are predominantly guns, e.g. pistols, AK-47s and shotguns. Japanese assassin Miko however may have sword-based attacks that make use of the MotionPlus addon.

Online play is also said to be fully supported. At least four players will be able to join up and enjoy a co-op mode. CPU hunters will fill any empty slots in the team.

The Grinder is penciled in for a holiday 2010 release.

Sounds pretty damn cool! We need more games that take advantage of the Wii instead of all this shovelware and kid crap.

Looks like a nice FPS. I guess I'll be checking this out.

They are going to get so rich.

Left 4 dead for the Wii? Sweet.

Hmm. Kind of sounds like Left 4 Dead if you ask me. Cool nonetheless, but even the artwork seems similar. Either that, or I've just been playing way too much Left 4 Dead.

Looks amazing. High Voltage has their head in the right place, but slashers..? Didn't I already pwn enough of them in Dead Space?

Keep this up and I'll have no complaints for the Wii.

God thank you for sending us High Voltage Software, for that I am eternally grateful. No but seriously High Voltage rocks. First The Conduit then Gladiator A.D. and now The Grinder. I can't wait to buy and play them all.

Okay, this looks like it will definitely be a rated M game.